Order the banh beo chen at the downtown Vietnamese restaurant Saigon Social and six will show up, arranged in a circle around a dish of seasoned fish sauce. This is as it should be. Like Mormon missionaries, banh beo chen never travel alone. Typically, each of these soft disks of steamed rice flour is the size of an oyster, and a single banh beo would be about as satisfying as a single bluepoint. One is not a serving. Six is a good start.

Of course, you are not just knocking back cooked rice flour. Saigon Social dusts each little banh beo chen with fresh and powdered shrimp, fried shallots, scallion oil, browned cubes of pork fatback and chewy shards of steamed mung bean. With a little dessert spoon, you dribble some fish sauce rendered spicy by fresh bird’s-eye chiles over a banh beo before slipping it into your mouth. The flavors are distinctly, characteristically Vietnamese, but they are fleeting. The first banh beo is gone in a moment. You still have five more and, if you have planned carefully, nobody to share them with. 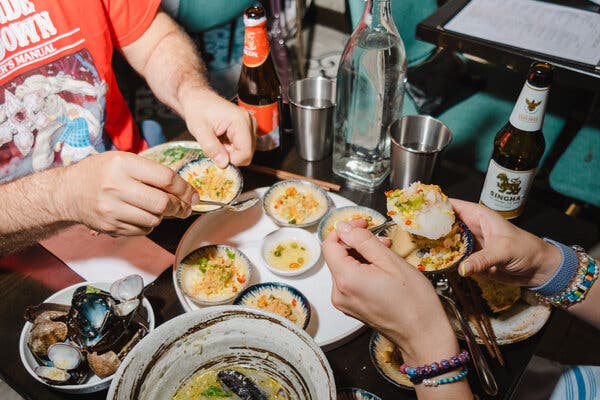 Banh beo, the steamed rice cakes from Hue, come six to an order.Credit…Lanna Apisukh for The New York Times

Banh beo chen originated in Hue, once the home of the Nguyen Dynasty emperors. The dish is sometimes said to epitomize that city’s refinement. Its particular brand of delicacy does not seem to make a natural fit with the feeding habits of the Lower East Side, where Saigon Social is presenting a full menu after more than two years of stops, starts and postponed ambitions.

For much of that time, Helen Nguyen, the owner and chef, was scraping by on to-go orders sold through a window on Orchard Street. This was how I first encountered Saigon Social, on a cold fall night in 2020, when the dining room was still closed for the pandemic. I remember carrying my boxed-up dinner from the window to one of the tables along Stanton Street. I hadn’t seen the Lower East Side so empty since the 1980s, and winter was on its way. There was no indication on Ms. Nguyen’s menu that her ambitions took in anything as delicate as banh beo, not the easiest dish to put in a box.

Helen Nguyen, the chef and owner, introduced her full menu in March, two years after she’d planned.Credit…Lanna Apisukh for The New York Times

The full scope of what she had in mind was not apparent until this March, when she opened the entire dining room for the first time. The narrow space is crisp and contemporary, with tables lined up against a wall of windows and a small bar facing the kitchen, although nobody seems to sit there. At the far end of the room is a comic-book style mural of the plaza in front of the Ben Thanh market in Ho Chi Minh City. From certain tables, the Vietnamese street scene can seem to merge with the view of Arlene’s Grocery across the street.

The cars and clothes in the mural make it likely that the city was then still called Saigon. You might see in this, and in the restaurant’s name itself, an exile’s backward glance at a world left behind. Ms. Nguyen, born in California, is not an exile herself, but her mother and father both fled Vietnam for the United States, and it was at their sides that Ms. Nguyen learned the flavors of their first country.

Saigon Social is, at its best, a celebration of Vietnamese food made the traditional way. Banh tet chien, sticky-rice cakes usually made for the Lunar New Year, would be very welcome in any month when they are as good as Ms. Nguyen’s. Crisp and chewy at the same time, they hold at their center mung beans and a nugget of marinated pork belly that has more or less become one with the rice.

Banh tet chien are rice cakes filled with pork belly and mung beans that practically melt into the rice.Credit…Lanna Apisukh for The New York Times

These loose parcels are wonderful to eat with a few leaves of mint and cilantro, a crunchy slice of fried shallot and some nuoc cham dipping sauce. So are the nem cua be, minced crab, shrimp and pork packed with vermicelli inside tightly wrapped bundles of deep-fried rice paper.

Those nem cua reappear, to magnificent effect, in the restaurant’s star main course, the three-way pork extravaganza called bun cha Hanoi. Sweet, charred chunks of grilled pork and tender sausage patties wrapped in betel leaves are sunk in a bowl of hot liquid that appears to be soup. It is merely sweetened vinegar heated with fish sauce; its job is to season the pork and keep it warm while you contemplate how you are going to approach all of this. Lettuce wraps are probably your best route; how you get there is up to you but may include dunking vermicelli into the broth and making free use of the pickles that bob alongside the sausages.

The cooking at Saigon Social is at its most appealing when it is at its most purely Vietnamese. An open-faced turmeric crepe topped with salmon roe, octopus and sea urchin struck me as an uninspired play for the uni mob. And while there may well be a zoning rule requiring every chef on the Lower East Side to sell a burger and a fried-chicken sandwich, I wish Ms. Nguyen had resisted. There’s nothing really wrong with the burger, which is dressed like a banh mi, but there are more rewarding things on the menu.

Lately, when anxiety creeps up on me, I find myself wishing I could distract myself with a bowl of Ms. Nguyen’s garlic noodles, which swirl with black pepper and butter. Normally the noodles are made with shrimp, although the particular bowl that I found so therapeutic contained a fried soft-shell crab instead.

Then again, Saigon Social’s bun rieu would do the trick, too. This noodle soup is as full of snacks as a sixth grader’s lunch box: whole shrimp, squishy cubes of fried tofu, slices of the pork cold cut more often seen pressed into a banh mi and then a fluffy pink cloud of a meatball made from pork, crab and shrimp. All of this is kept warm by tomato-fortified chicken broth with a blast of shrimp paste.

An additional gray dab of shrimp paste waits in a small condiment dish, to be used in case the broth isn’t potent enough. Few things clear the mind quite like a good snort of shrimp paste.

Tags
Fried Ri̇ce See That This

My O.C.D. Diagnosis Was a Blessing, Until It Became Too Central to My Identity

From Pizza to Dip, Chips and Popcorn, Pickle Is Summer’s Big Flavor

14 No-Cook Recipes During a Heat Wave

Restaurant Review: A Home for Taiwanese Food, Lard and All, at Wenwen

The Art of the Serving Set