Osemenga Celey-Okogun, 19, a biology major at Medgar Evers College in Brooklyn, was prepared to drop out of school this semester for one reason: She was about to become homeless.

Instead, Ms. Celey-Okogun joined 12 other students who recently moved into an industrial-chic rental building in Long Island City, Queens, where their rent will be covered and a suite of services will be provided by a nonprofit housing group.

The move is part of a new pilot program designed to combat a mostly unspoken scourge within the sprawling City University of New York system: 14 percent of students wererecently homeless in a 2019 survey of almost 22,000 respondents, according to the Hope Center for College, Community and Justice.And more than half of respondents worried about running out of food before they could pay for more, said Sara Goldrick-Rab, the lead author.

Students struggling with housing “are basically invisible,” Dr. Goldrick-Rab said, in part because of false assumptions that college students have more advantages than other groups facing homelessness.

The program, expected to house up to 36 students, is largely being funded by Trinity Church Wall Street, an Episcopal parish in Lower Manhattan with a multibillion-dollar real estate portfolio. A second program funded by the church group, in collaboration with the Borough of Manhattan Community College, will provide 40 students with dormlike housing in Harlem for three years.

Housing insecurity — which can range from having difficulty paying the rent, to couch surfing or living in overcrowded or dangerous conditions — is a problem among college students that few outsiders recognize, said Beatriz de la Torre, the managing director of housing and homelessness for Trinity Church Wall Street, which has contributed $2.25 million to the two programs. 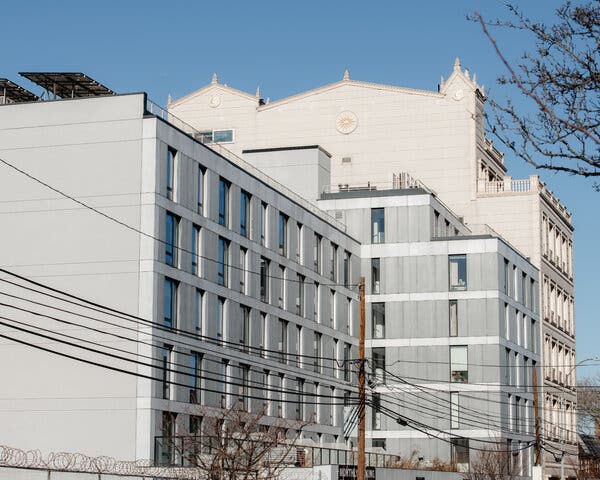 As part of a new privately funded housing program, up to 36 college students facing housing insecurity will get to live in this seven-story rental building in Long Island City, Queens. Credit…George Etheredge for The New York Times

Students staying at the Long Island City rental building have access to amenities like a library, gym and recreation rooms.Credit…George Etheredge for The New York Times

“My jaw just dropped,” Ms. de la Torre said, when she learned how prevalent housing insecurity was among students. “Like, how is this possible?”

It’s often costs that are unrelated to tuition, like housing and living expenses, that cause students to drop out of school, said Ann Shalof, the chief executive of the Neighborhood Coalition for Shelter, the nonprofit group running the Long Island City pilot. “We’re really trying to take that pressure off.”

Obtaining a college degree can make a big difference in the future earnings of students. City University of New York students with a baccalaureate degree earned a median salary of $60,275 five years after graduation, over 40 percent more than the median earnings of students without postsecondary education, according to the Office of the New York City Comptroller. Half of students in the university system come from households with incomes below $30,000.

Ms. Celey-Okogun, who moved to New York from Nigeria three years ago, was staying with a friend on Staten Island while commuting to Medgar Evers College in Crown Heights, Brooklyn. When her friend told her she would have to move, she decided to withdraw from school and pause her plans of becoming a gynecologist.

“I felt like I couldn’t do anything,” she said. “I was swamped trying to find housing.”

But after applying for housing through a program for students at risk of homelessness, Ms. Celey-Okogun qualified for part of a three-bedroom apartment in a recently built, seven-story rental in Long Island City, where she will share the space with up to two other students.

The students in Long Island City will share co-living-style apartments, where roommates have private bedrooms but share a kitchen and bathrooms.Credit…George Etheredge for The New York Times
The recently built rental building in Long Island City has a recreation room with a pool table and an outdoor deck.Credit…George Etheredge for The New York Times

The Neighborhood Coalition for Shelter is renting seven apartments from Ranger Properties, the developer of a co-living rental building in Long Island City, where roommates have private bedrooms but share a common kitchen and bathrooms. Ms. Shalof said it will cost around $25,000 to $30,000, per student, for the first year, which includes the cost of an on-site social worker and other services, including a food pantry and resources for academic and employment support.

That is a relative bargain, compared to the cost of keeping someone in a homeless shelter, said Félix V. Matos Rodríguez, the chancellor of the City University of New York. Project Renewal, a homeless services provider, estimated that it cost their group $52,000 last year to keep a single adult in a shelter.

Stable housing also has an outsize effect on academic success, said Deborah Harte, the director of the advocacy and resource center at Borough of Manhattan Community College, where 23 students have moved into apartments in Harlem. One applicant was sleeping overnight at his workplace, while another was living in a homeless shelter, she said.

For Isabella Marie Zaldaña, 19, a Medgar Evers freshman who was living with up to four other family members in a studio apartment on the Upper East Side, the new space has been life changing, she said.

“I would be living in coffee shops and libraries trying to get work done,” Ms. Zaldaña, who has dyslexia, said about the difficulty of studying at home. Between working part-time as a hostess in a restaurant and attending classes in pursuit of a nursing degree, she said she was often sleep deprived.

Isabella Marie Zaldaña, 19, a Medgar Evers freshman, said that moving into the rental building has been life changing.Credit…George Etheredge for The New York Times

Now she spends much of her free time in the common area of her new rental building, which also has a gym, a library and outdoor space. From an oversize window, her bedroom has a view of the Empire State Building and a slice of the Upper East Side, where her mother, grandmother and sister live.

“I feel eternally blessed and grateful that I actually have a space where I can study,” she said.

The future of the programs will depend on securing new funding, said Ms. de la Torre, with Trinity Church Wall Street.

“This is a complete drop in the bucket — the need is so much greater,” she said. “The government needs to step up at the city and state level.”

Tags
College Said She Was With