WASHINGTON — Over eight hours last Thursday night and into Friday morning, Representative Kevin McCarthy of California hit on many issues as he spoke on the House floor in an unsuccessful effort to thwart House passage of President Biden’s social safety net and climate change bill. But among his most audacious assertions was that Mr. Biden was to blame for the country’s failure to quell the pandemic.

Mr. McCarthy used this line of attack even as members of his own Republican Party have spent months flouting mask ordinances and blocking the president’s vaccine mandates, and the party’s base has undermined vaccination drives while rallying around those who refuse the vaccine. Intensive care units and morgues have been strained to capacity by the unvaccinated, a demographic dominated by those who voted last year for President Donald J. Trump.

Yet Mr. McCarthy, the House Republican leader, pressed his point: “I took President Biden at his word; I took him at his word when he said he was going to get Covid under control,” he declared in the dead of night. “Unfortunately, more Americans have died this year than last year under Covid.”

As cases surge once again in some parts of the country, Republicans have hit on a new line of attack: The president has failed on a central campaign promise, to tame the pandemic that his predecessor systematically downplayed. Democrats are incredulous, dismissing the strategy as another strand of spaghetti thrown at the wall.

White House spokesman Andrew Bates hit back hard: “If Covid-19 and inflation had lobbyists to help them kill more American jobs, Kevin McCarthy would be their favorite member of Congress,” he said. “He is actively undermining the fight against Covid, which is driving inflation.” 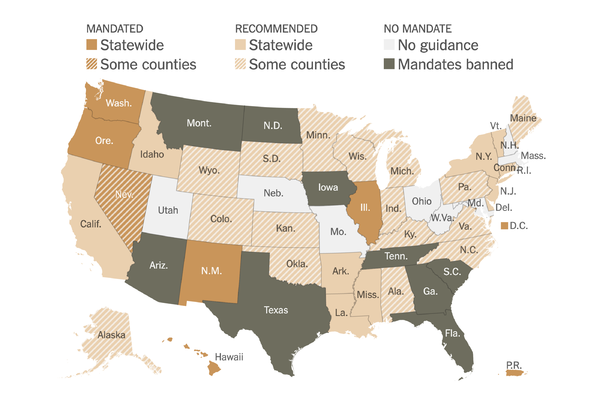 See Mask Mandates and Guidance in Each State

Follow the changing rules and recommendations on wearing masks, as well as guidance for masks in schools.

But Republican strategists and pollsters say Democrats should not be so quick to brush off the criticism, even if many Covid-related deaths this year were among those who ignored Mr. Biden’s entreaties to get vaccinated.

“McCarthy’s first hit on Biden is a competence hit — that he sold himself to voters as the guy who can make a difference in the fight against Covid, yet more Americans are dying,” said Neil Newhouse, a Republican pollster who has surveyed voters on the issue. “The bottom line is that Republicans have always been more focused on the economic impact of the pandemic, and now we’re seeing independents and swing voters expressing concern about those impacts as well: supply chain, inflation, jobs, stores not being open or having what they need.”

He added, “There is a sense that Biden’s presidency is falling short on its promises.”

The Thanksgiving wave is the latest surprise in a pandemic that is nearing its two-year mark. The nation’s 14-day average of new infections is up 25 percent, to over 94,000 new cases a day, with the upper Midwest again the hottest of hot spots. At the same time, the efficacy of the coronavirus vaccines is holding, according to the latest data from the Centers for Disease Control and Prevention. Unvaccinated people are 5.8 times as likely to test positive than fully vaccinated people, and 14 times as likely to die if infected.

The partisan gap in infection and vaccination rates is only slightly narrowing. The most Republican counties have 2.78 times as many new cases than the most Democratic counties, down from three times as many a month ago, according to the Democratic health care analyst Charles Gaba, using data from Johns Hopkins University. The death rate in those Republican counties is nearly six times as high as the death rate in the Democratic counties.

It is unclear whether the continuing pandemic or the vaccine mandates devised to beat it are causing the president’s approval ratings to slide. Mr. Newhouse’s firm, Public Opinion Strategies, found Mr. Biden’s overall approval rating for his handling of the pandemic to be a relatively fine 51 percent in October, down from 69 percent in April but only from 53 percent in August.

But in the suburbs, where the 2020 presidential race was won, the president’s approval rating on the pandemic has slipped since August from 51 percent to 45 percent. And among white men, the slide is more pronounced, from 58 percent in April to 43 percent in August and 32 percent in October.

Republican lawmakers are continuing to try to block vaccine mandates at the local, state and federal levels. In September, a proposal by Senator Roger Marshall of Kansas, an obstetrician, to block the use of federal funds to carry out the president’s vaccine mandate for businesses with at least 100 employees failed by one vote, after all 50 Republicans in the Senate backed it.

Later that month, Republican senators introduced legislation to prohibit federal agencies from requiring proof of vaccination. And Mr. Marshall and 10 other senators wrote a letter this month to Senator Chuck Schumer, Democrat of New York and the majority leader, vowing to “oppose all efforts to implement and enforce” vaccine mandates “with every tool at our disposal, including our votes on spending measures.”

Republican lawmakers continue to try to block vaccine mandates at the local, state and federal level.Credit…Ash Adams for The New York Times

As Mr. McCarthy faulted Mr. Biden for failing to stop the virus, he also criticized him for demanding people get vaccinated, even health care workers. Mr. Biden, he said, “fired workers who were working because they wouldn’t comply with his Covid mandates. These were the same people who were heroes a year before.”

Matt Sparks, a spokesman for Mr. McCarthy, said he saw no contradiction in fighting vaccine mandates while faulting the president for his pandemic response. For instance, “natural immunity from those that have recovered from infection” should suffice to meet vaccination requirements, he said.

“The lack of acknowledgment of this fact further erodes the public trust in the vaccine and our public health officials,” he added. (The C.D.C. strongly advises that even those who have recovered from Covid-19 get vaccinated, citing a study out of Kentucky that found that previously infected people were more than twice as likely to get Covid-19 again as fully vaccinated people.)

Beyond the science is politics: Republican strategists believe Mr. Biden’s approval ratings on the economy — the key to his party’s prospects in next year’s midterm elections — cannot improve until voters are more satisfied with his performance on the pandemic.

David Winston, a Republican pollster who advises House G.O.P. leadership, said Mr. Biden was repeating a mistake that President Barack Obama made early in his tenure when he interpreted his election in 2008 as a mandate to make good on his promise to provide universal health care, when it was really to right an economy mired in the Great Recession. In Mr. Biden’s case, his pursuit of ambitious social welfare and climate change policies may feel to many voters like a diversion from their central concern — ending the pandemic so that economic life can return to normal.

During the presidential election last fall, Mr. Winston said, “the economy was the No. 1 issue, but you couldn’t get to the economy until you resolved Covid. People trusted Republicans on the economy, but Biden on Covid.”

White House officials say the president has made substantive progress toward ending the pandemic. At this time last year, 250 million adults were not vaccinated. Now, 50 million remain without inoculation. In the administration’s early days, the government was struggling to scrounge up enough vaccine for those who wanted it. Now there is enough to vaccinate adults and children, and for booster shots.

And the nation’s largest employer, the federal government, complied with a vaccine mandate with no real disruptions.

Republicans assert a different response: that the administration squandered an opportunity to bring the country together, by buffaloing through vaccine mandates and sending mixed signals on mask-wearing and booster shots. A more productive strategy, they argue, would have been making a full-throated push for Covid treatments and other approaches that the unvaccinated might have been more willing to accept.

As Mr. Biden’s first year in office nears an end, Republicans argue, the public outlook has changed. “Joe Biden and the Democrats ran an entire campaign based on a dishonest promise that they alone could shut down a worldwide pandemic. They failed and voters are punishing them accordingly,” Mike Berg, a spokesman for the National Republican Congressional Committee, said.

A Timeline of Failed Attempts to Address U.S. Gun Violence

After Texas Shooting, Ted Cruz Digs In Against Gun Control