GUANTÁNAMO BAY, Cuba — Mention this place, and people tend to think of caged men wearing orange uniforms and on their knees, the image of opening day at the wartime prison four months after the attacks of Sept. 11, 2001.

But this military base is more than one big prison. About 6,000 people live at the U.S. Navy outpost, which has the trappings of small-town America and the amenities of a college campus, and functions like a cross between a gated community and a police state.

It has a Defense Department school system for the children of sailors and contractors, a seaport for Navy and Coast Guard supply missions, bars, ball fields, neighborhoods with swing sets, beaches with barbecue grills and pleasure boats to rent for excursions on the bay. 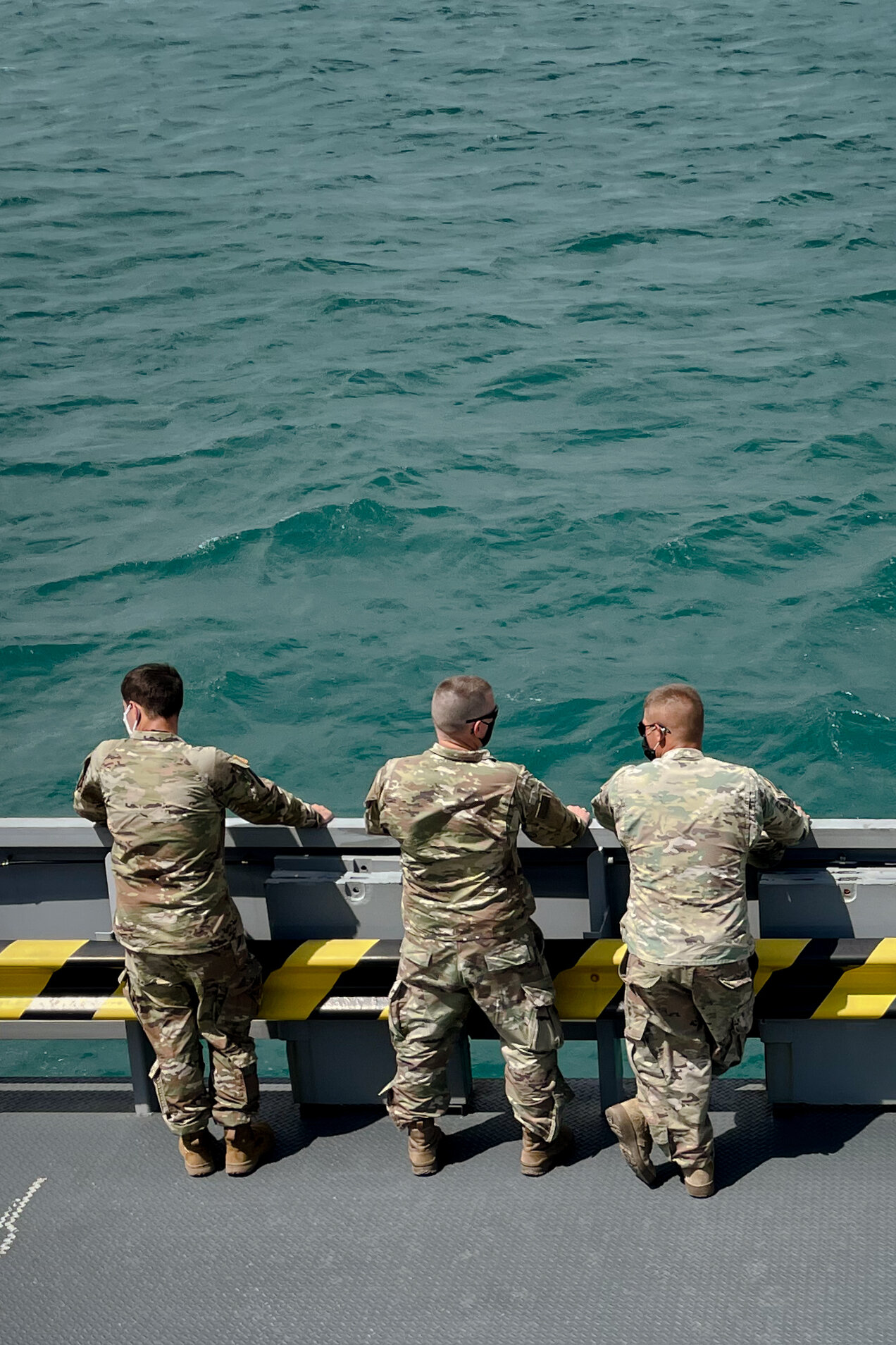 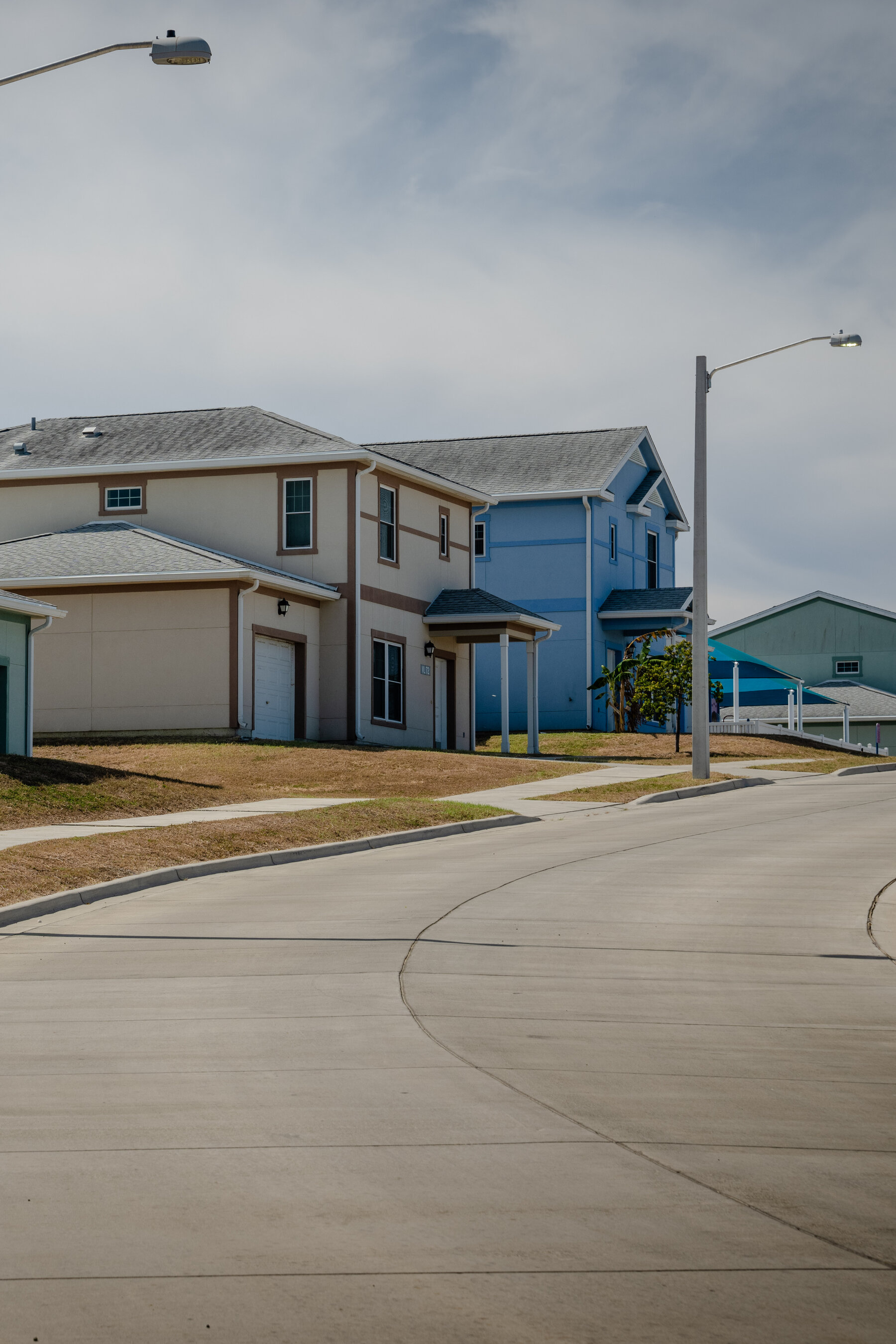 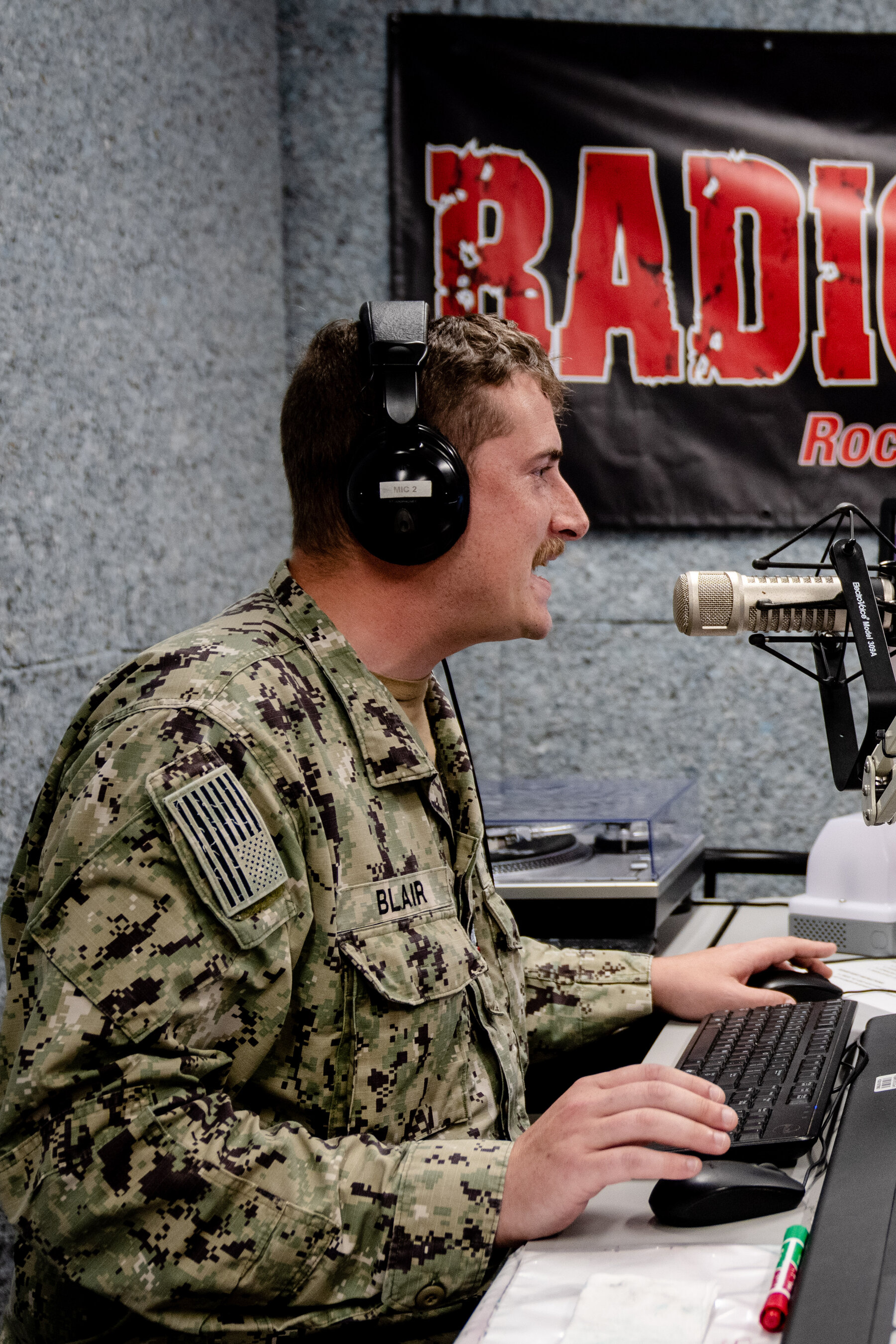 The base straddles Guantánamo Bay, a U.S.-controlled body of water, with some services on the leeward side and most on the windward, connected by a ferry.

Sailors and other Defense Department employees on multiyear assignments can bring family and live in suburban-style neighborhoods.

The base has a campus-style radio station, Radio Gitmo, where D.J.s hold fund-raising drives.

It also has a McDonald’s with a drive-through wide enough for tactical vehicles, just below a hilltop church with a white steeple. A 10-minute drive in one direction takes you to Nob Hill, a neighborhood of three-bedroom homes for junior officers on the base of 700 families.

Drive 10 minutes in another direction, past the base’s scrubby nine-hole golf course, and you arrive at a gate to what is essentially a base within the base, the detention zone. It is under the command of an Army brigadier general who is responsible for the Pentagon’s last 39 wartime prisoners and a staff of 1,500 people, mostly soldiers from the National Guard on nine-month tours of duty.

The base covers 45 square miles straddling Guantánamo Bay, the U.S.-controlled body of water that splits the base in two. A small unit of Marines is responsible for security on the U.S. side of 17.4 miles of fences that surround the base. A portion of the Cuban side has a minefield.

Most days it is easy to forget that the base sits in southeast Cuba. 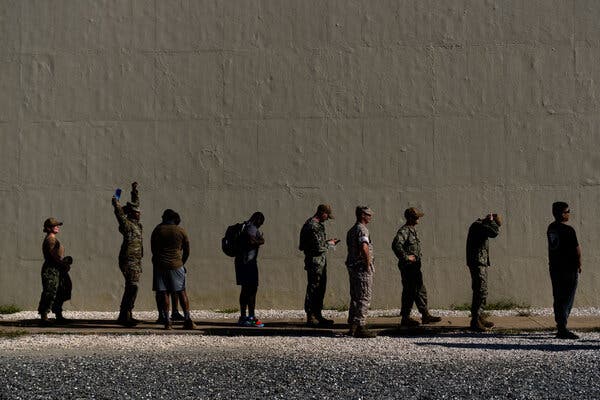 Soldiers, sailors and Marines waiting for a coronavirus vaccine outside the base’s Windjammer Ballroom, which doubles as a bingo parlor between fancy dress balls.

Fidel Castro bobbleheads are bestselling souvenirs at Radio Gitmo, the base station that adopted the slogan “Rockin’ in Fidel’s Backyard” long before Castro died in 2016.
Photography is forbidden at the commissary’s souvenir shop, where the latest signature goods riff on the international television franchise. No, there is no such reality show.

Little Spanish is spoken here, except when a unit of the Puerto Rico National Guard is on the post for a tour of duty in the prison zone. Tagalog and Creole are more prevalent because about one-third of the residents are Filipinos and Jamaicans. They are hired by Pentagon contractors and serve as the backbone of the labor force.

They do construction, make and serve meals in the restaurants, and are cashiers in the commissary. They change beds at guest quarters, cut and color hair at the salon, and offer sailing lessons at the marina. None are allowed to bring family, and they live in separate housing areas maintained by their employers. Bingo inside the base ballroom is a popular approved pastime.

A mini shopping mall with a Subway restaurant, bank, souvenir shop, hair salon, limited grocery, liquor and a department store is the center of commerce on the base.
“It is illegal to harm an iguana,” base visitors are warned. “Please exercise caution when driving or biking.” Feeding iguanas is also forbidden, a rule that is openly ignored.
An empty field on the outskirts of the Navy-run cemetery stands ready to receive the remains of Muslim detainees who cannot be returned home. Nine detainees have died at the prison, but the remains of each were repatriated.

By some measures, the base resembles a college campus — but one with a shooting range, razor wire, hundreds of soldiers and sailors in battle dress, and cars that suddenly stop in the road at 8 a.m. when “The Star-Spangled Banner” is broadcast each morning.

Some residents are issued meal cards for the cafeteria-style dining facilities. Single soldiers and sailors live in dormitories. The base has a souvenir shop peddling alumni-style T-shirts, coffee mugs and shot glasses. “No Bad Day,” says a T-shirt decorated with palm trees that boasts “Good Vibes” and “High Tides” at Guantánamo Bay, Cuba. It has a Saturday night scene at the Tiki Bar, a volunteer car pool called Safe Ride so people won’t drink and drive, and Alcoholics Anonymous meetings three times a week.

It also has intramural sports events and a sexual assault awareness campaign.

The base has a new $65 million K-12 campus for the approximately 250 children who are not homeschooled.
A pirate is the mascot of the base’s elementary school, known in Navy circles as GTMO.

But it is a military base, after all. Drones are forbidden. Trick or treating is allowed only in certain neighborhoods. News photographers must submit each and every picture they take to military censorship. Forbidden images include guard towers, certain razor-wire-ringed fences and security cameras, as well as critical infrastructure, such as the four wind turbines that tower above the base and can be seen at sea.

Anyone traveling to the base needs permission from the commanding officer, a stamped access form that is essentially a visa to the Independent Republic of Guantánamo Bay, and then a seat on an approved flight, generally a Pentagon charter from the Eastern Seaboard.

Sailors and civilians can furnish the suburban-style homes with their belongings brought by barge from Florida.
The only McDonald’s in Cuba first opened on the base in the 1980s, and is a 10-minute drive from the prison zone.

The current commanding officer is Capt. Samuel “Smokey” White, who goes by Sam to the few residents on board who don’t address him as “sir” or “skipper.”

He has a zero-tolerance policy for alcohol, meaning no matter how big you are, you can’t have a beer and drive. Get caught driving while drunk, and the commander can throw you off the base. Or not.

Usually the skipper is the person at the helm of a ship. But the honorific is particularly apt because, ever since the United States cut itself off from the Cuban infrastructure grid in the 1960s, after Fidel Castro’s revolution, Guantánamo is very much like an aircraft at sea.

The base treats its own water in a desalination plant and generates its own energy from fossil fuels, solar panels and wind energy. It is resupplied by air and sea. A twice-monthly barge from Jacksonville, Fla., brings food for the commissary, new vehicles for the military, construction and building supplies, and household goods. A twice-weekly refrigerator flight delivers fresh fruits and vegetables and other perishables.

The base has secluded rocky beaches, a designated dive park, sail and pontoon boats, and two swimming pools.
Most tactical vehicles are forbidden at the McDonald’s drive-through window.
A student receiving her annual eye exam inside a classroom at the base school.

For nearly 20 years, base commanders have described the U.S.-Cuba relationship along the fence line as benign, with none of the tensions suggested in “A Few Good Men.” Each June, the base commander reminds his Cuban counterpart in the Frontier Brigade that there will be fireworks on the Fourth of July; nobody is shooting at them.

In 2018, when a wildfire advanced through the Cuban minefield toward Nob Hill, forces from both sides dug ditches and fought the blaze. The collaboration culminated with a Soviet-era Cuban helicopter making several passes over the Navy base, scooping up water from the bay and dumping it on certain hot spots to snuff them out. 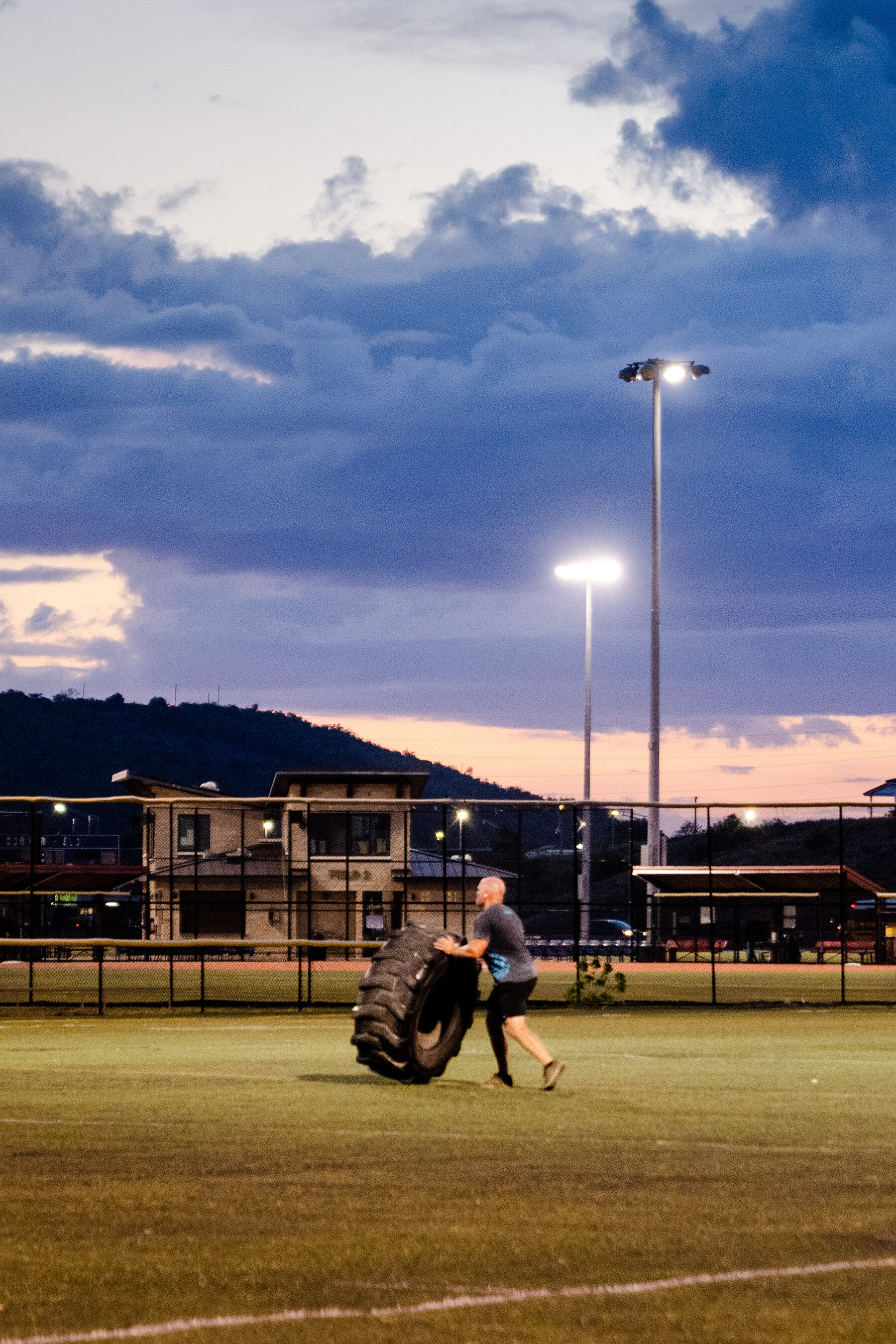 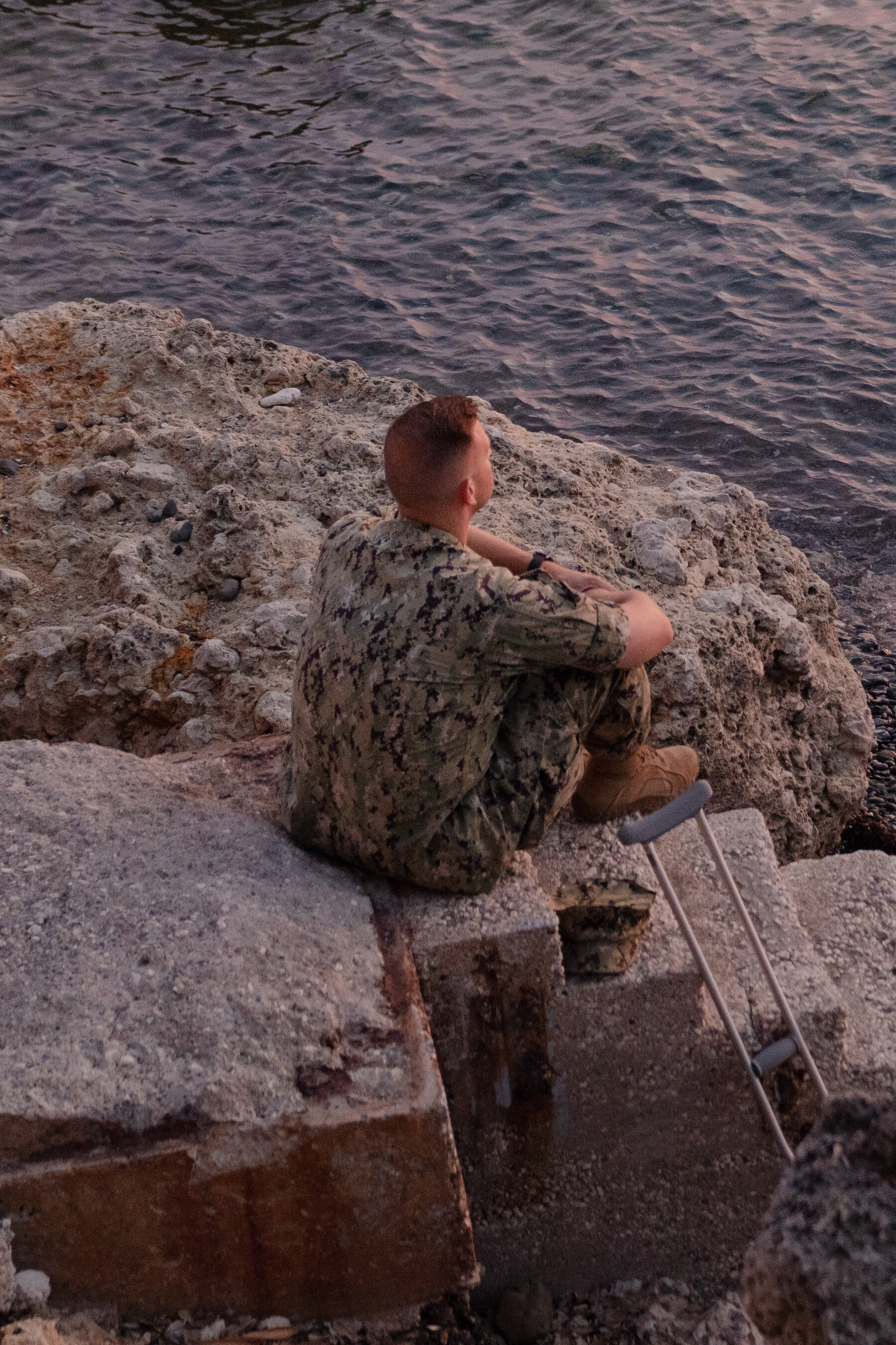 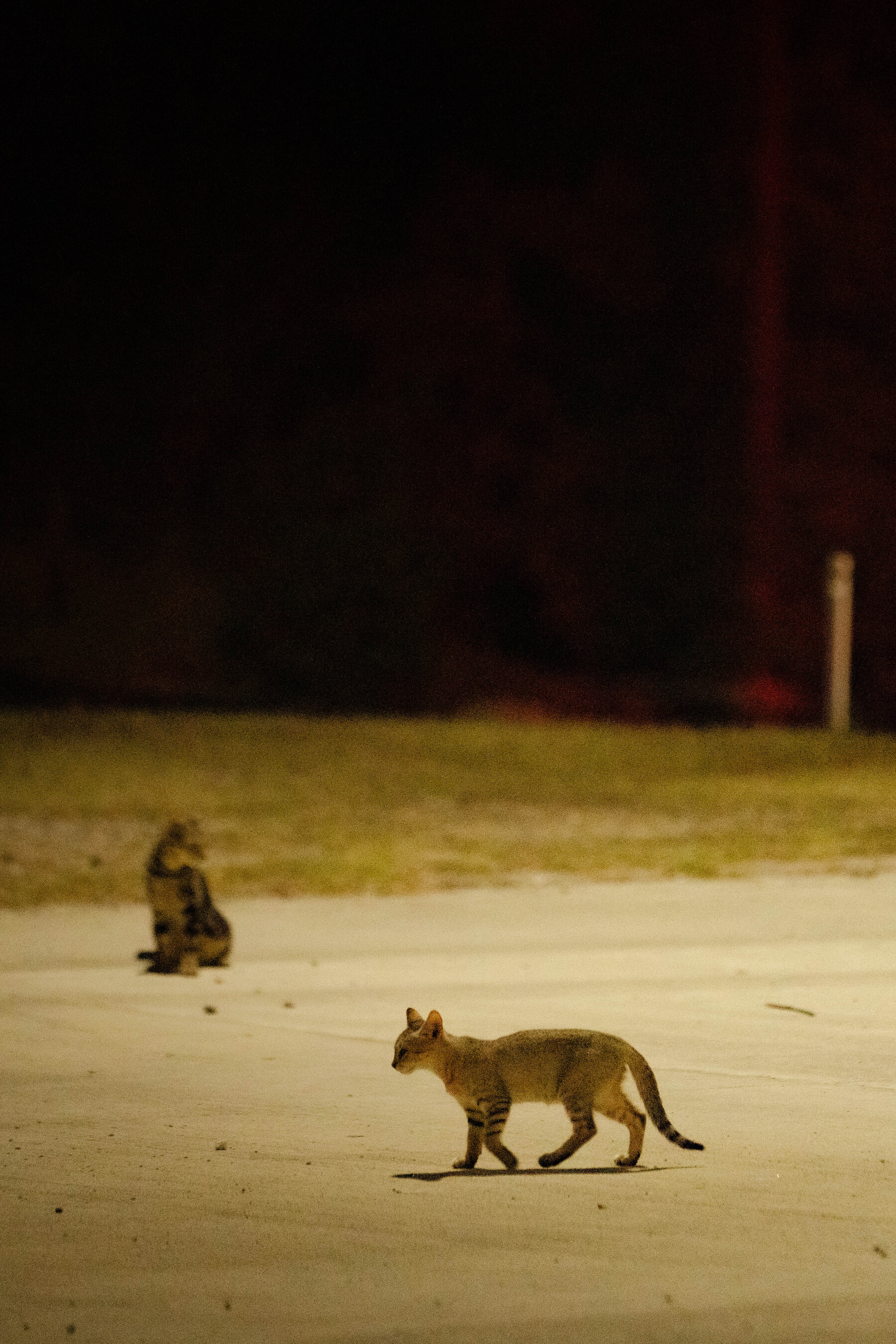 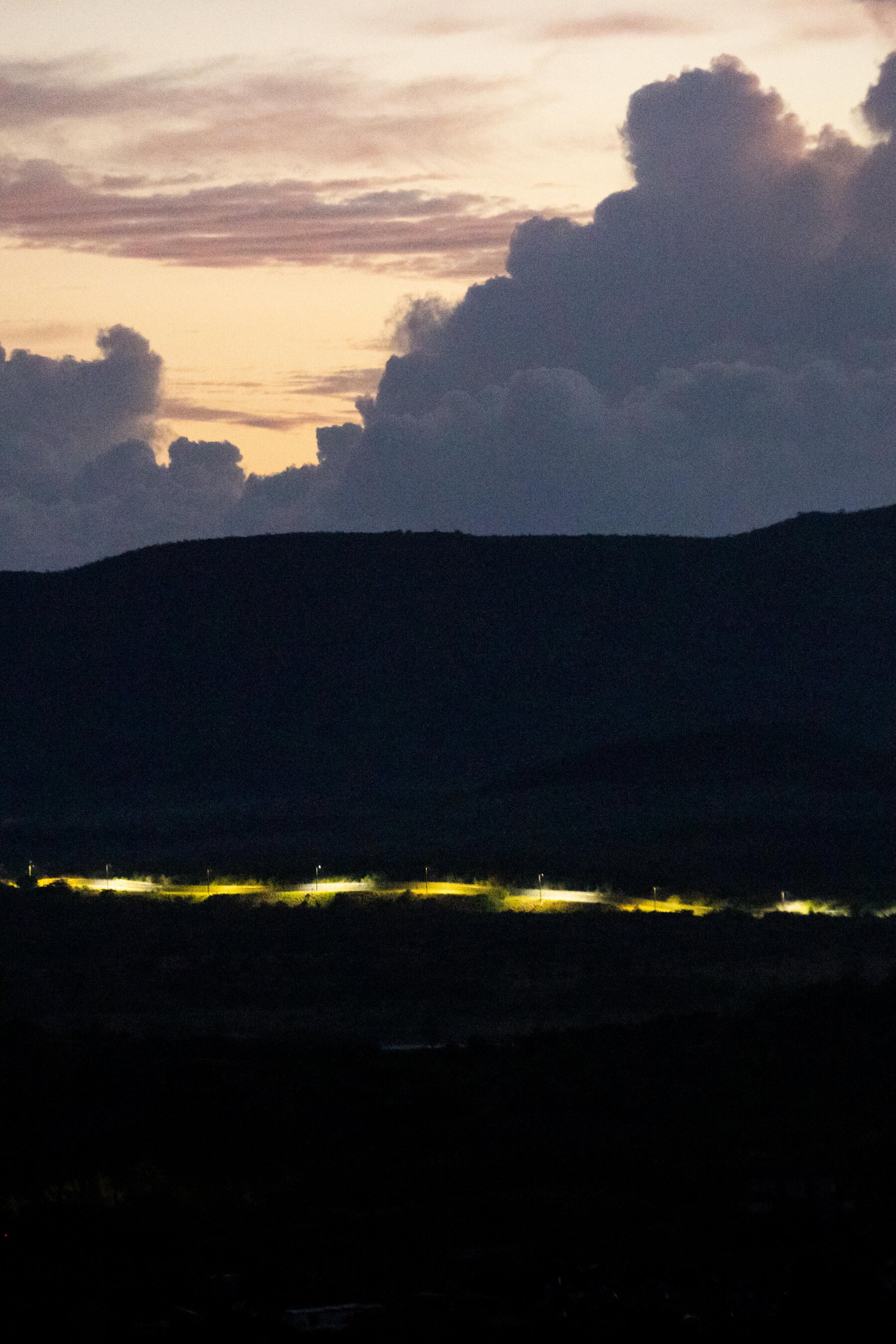 Fitness is a priority at the base, which in some ways has the feel of a college campus.

The base has beaches, parks with barbecue grills and pleasure boats to rent for sailing and fishing excursions.

Feral cats roam the base, some the descendants of pets that were abandoned by families as they finished their tours of duty.

The base is 45 square miles and separated from Cuban territory by a 17.4-mile fence line under the watch of a small unit of Marines who use patrols, electronic surveillance and other security measures to keep out intruders.

The base also has thousands of feral cats, the descendants of felines that found their way to the base through the Cuban minefield or of house cats left behind by Navy families. A group of concerned cat lovers founded Operation Git-Meow, which seeks to find homes for the feral cats and is trying to persuade the Navy to permit an all-volunteer catch, neuter and release program to reduce the wild cat population.

A small community hospital on the base offers family care and announces the first baby of each new year on its website. It also handles the care for the prisoners, no matter how complicated, under a congressional prohibition on bringing prisoners to the United States. Everyone else with a complex medical case is routinely sent to the mainland.

There was a time after the prison opened in 2002 and the detainee population rose to a peak of 660 in 2003 when the base bustled with a purpose that revolved around the detention operation. 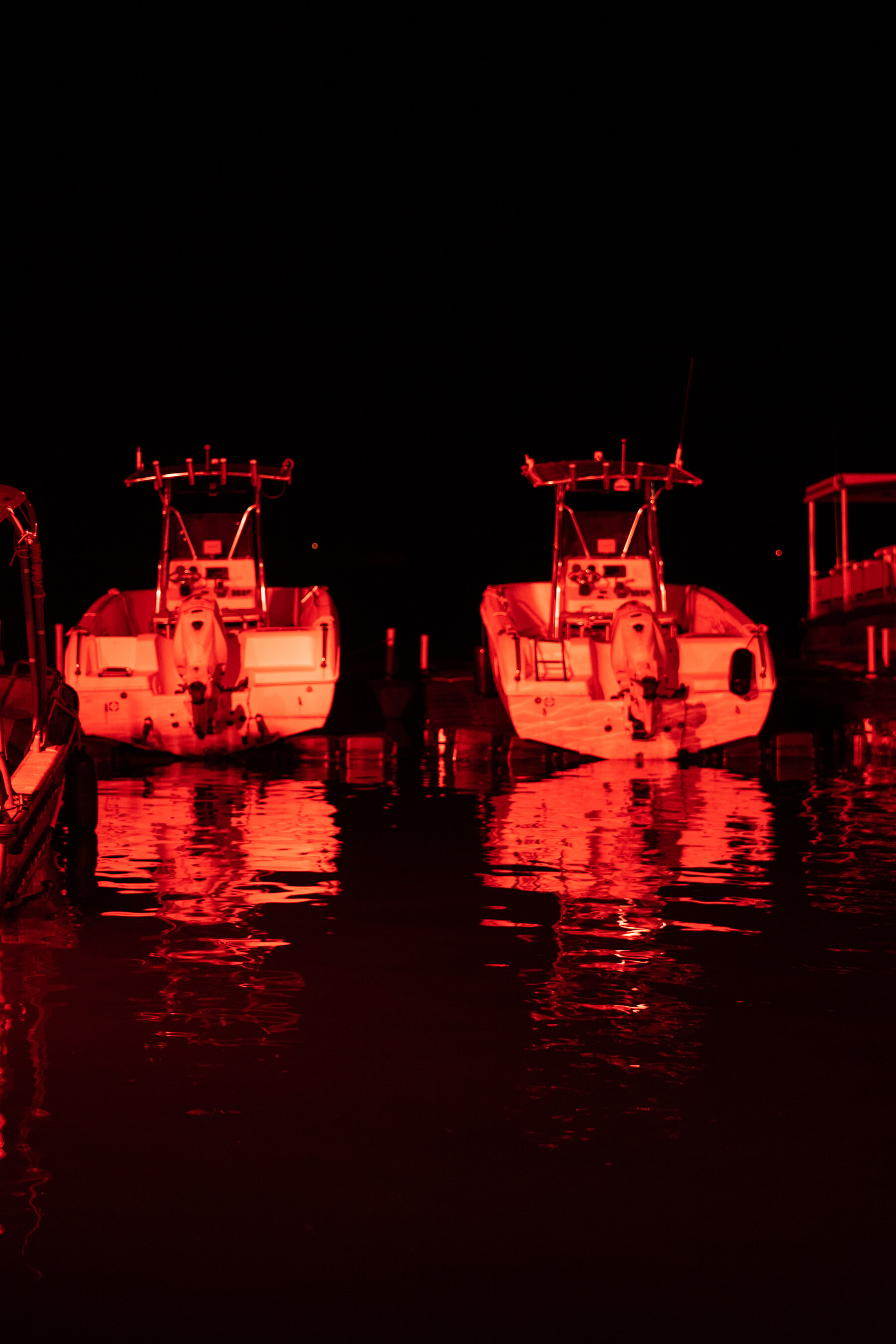 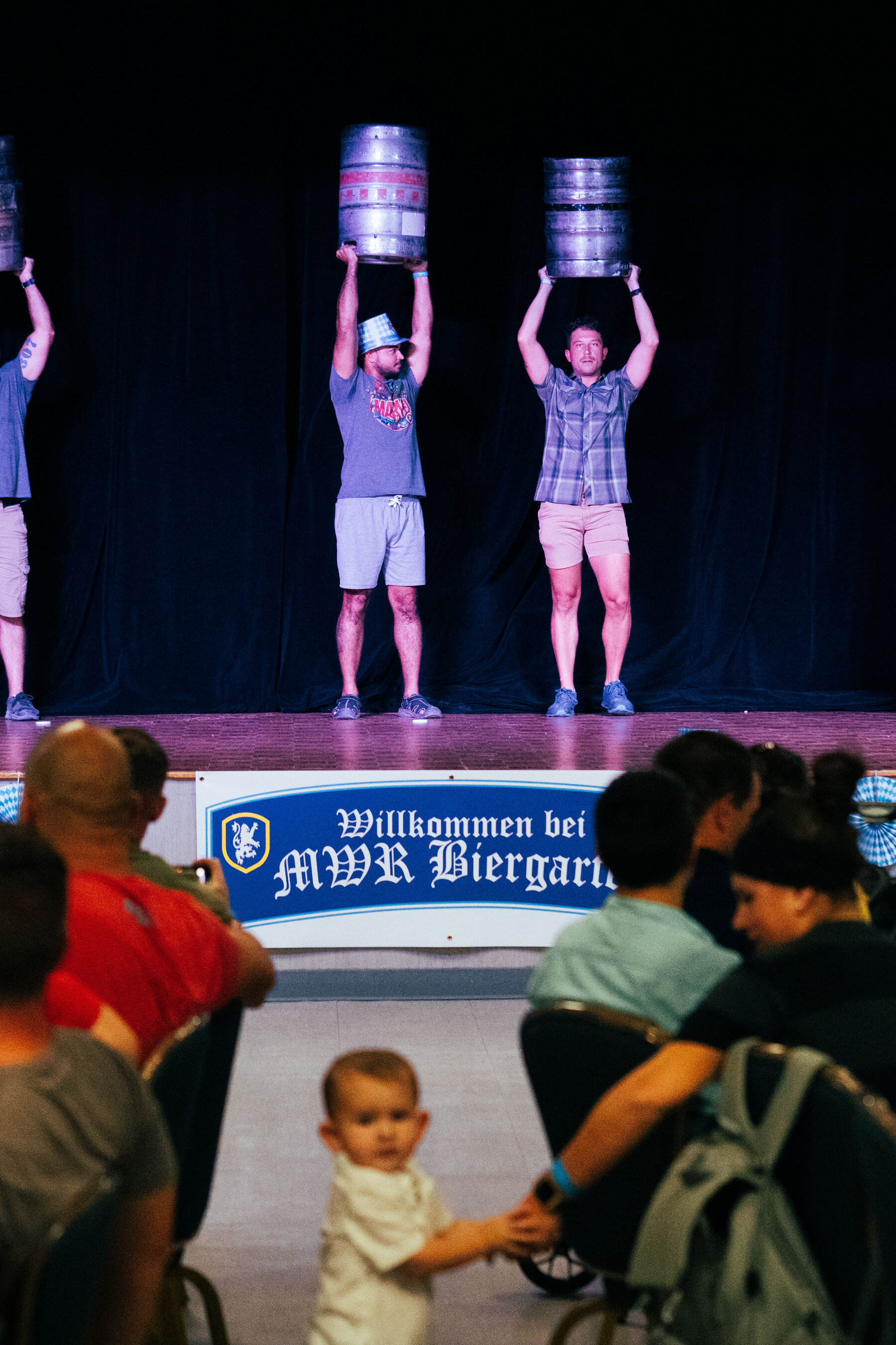 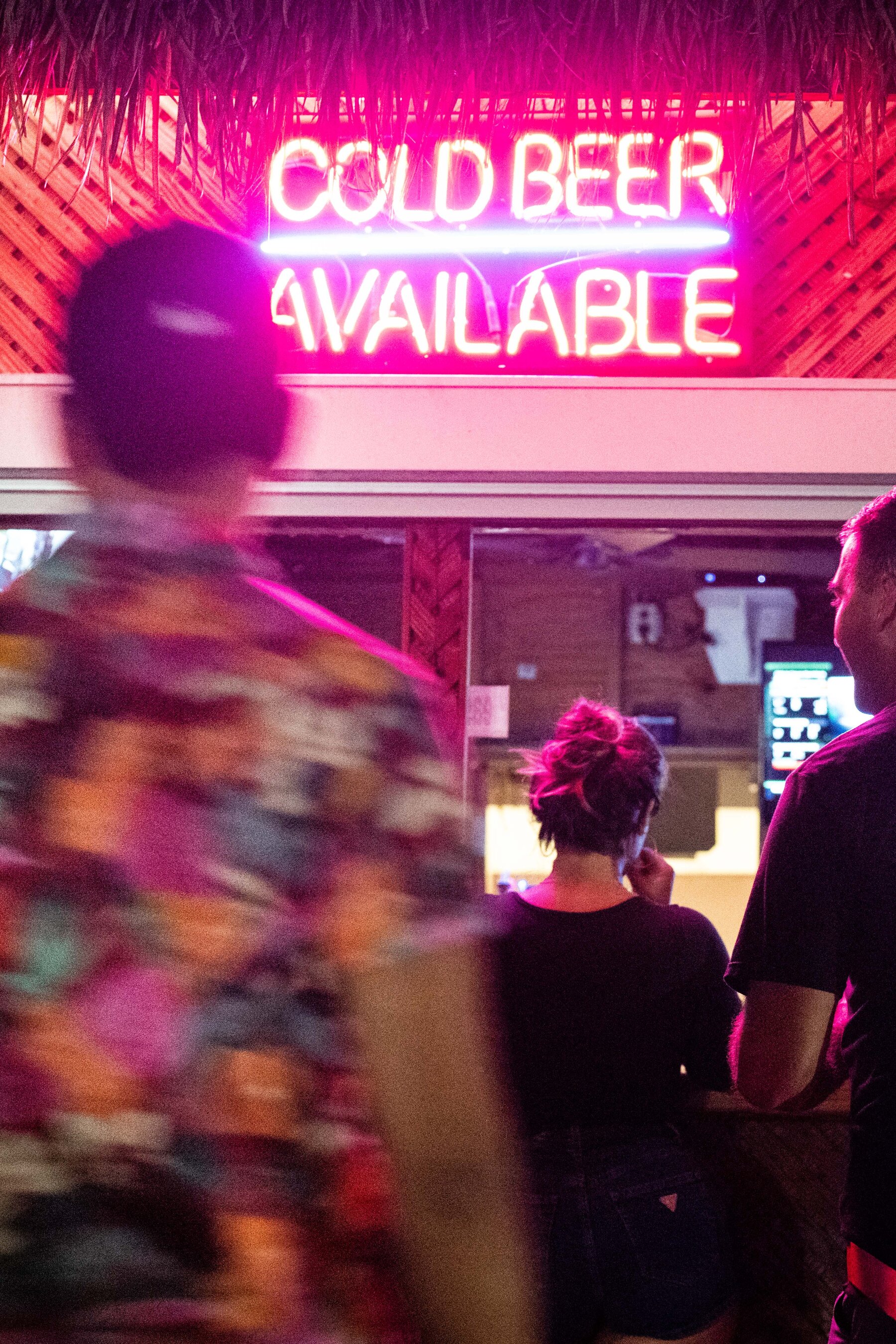 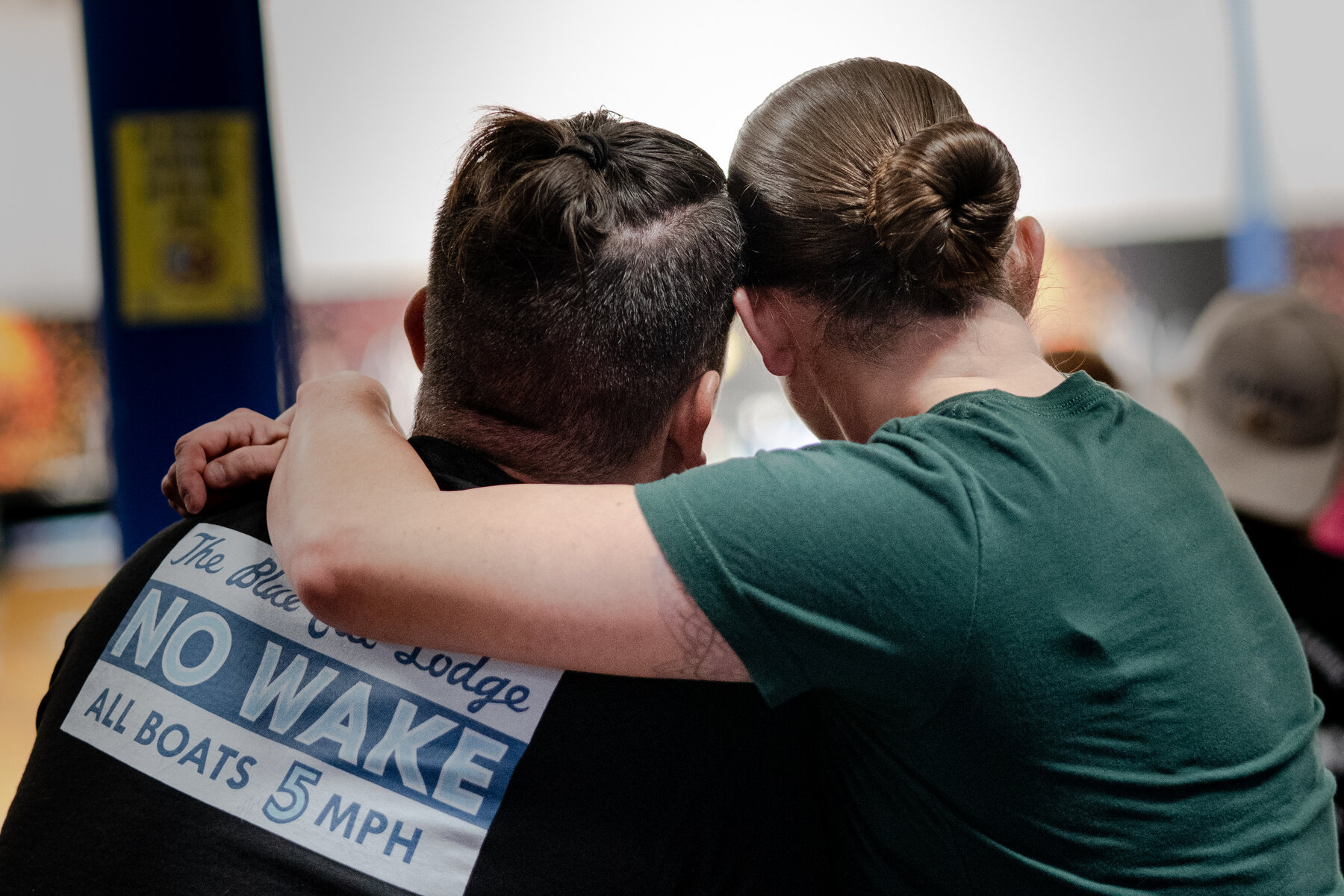 Licensed residents can rent sail and pontoon boats for day and night excursions after they get special instruction on how to navigate the bay.

Residents gather for typical celebrations such as Oktoberfest.

The base has the trappings of small-town America and the amenities of a college campus.

It functions like a cross between a gated community and a police state.

Air Force cargo planes regularly delivered detainees brought from Afghanistan, and base residents were ordered to stay inside for the high-security transfer of prisoners from the airstrip on one side of the bay to the cells on the extreme other.

Marines in battle dress who are responsible for securing the fenced perimeter of the base raise and lower the flag outside their headquarters in solemn ceremonies at the start and end of each day.
Sunset over Guantánamo Bay.

Over time, interest waned. There was a flurry of activity after President Barack Obama ordered the prison closed, and administration officials worked to decrease the detainee population. But congressional restrictions made it impossible to transfer the last dozens to the United States for any reason.

Most days, the prison operation that put Guantánamo on the map two decades ago is out of sight and out of mind — except when a convoy of white, windowless vans passes the McDonald’s to bring a detainee or two to the court compound at Camp Justice.

A windy day aboard the utility boat that carries people between the windward and leeward sides of Guantánamo Bay.
Tags
Base Cuba Day Dri̇ve Off

Roberts, Sotomayor and Gorsuch Address Reports of Conflicts Over Masks

New Government Website for Ordering Covid Tests Is Up and Running