Kyle Lobpries jumps out of the airplane — backward. As he watches it fly away, he leans back and shifts his gaze toward the inverted horizon, the sky bowing before the earth. He continues to drift until he feels he’s perfectly perpendicular to the planet.

Then he locks his knees, points his toes, clenches his buttocks, tucks his arms into his sides, shrugs his shoulders and hurls himself toward land as fast as humanly possible.

This technique, developed by jumping out of a plane five to 10 times a day for the better part of several years, is just part of the explanation for how Lobpries has propelled himself to the peak of the sport of speed skydiving. First developed in Florida in 1999, speed skydiving began gaining recognition as an international discipline in the early 2000s. The sport pits extreme thrill seekers against each other — and the laws of physics.

In a vacuum, as you may recall from middle school science, all objects fall at the same rate. Without air resistance, anything from a feather to a fuel tanker will accelerate towards the earth at a rate of 9.8 meters per second squared. But because of the earth’s atmosphere, free-falling objects eventually reach terminal velocity, in which acceleration slows to zero.

For an average amateur skydiver, who departs a plane feet first and faces the earth with her belly, terminal velocity is about 120 miles per hour. 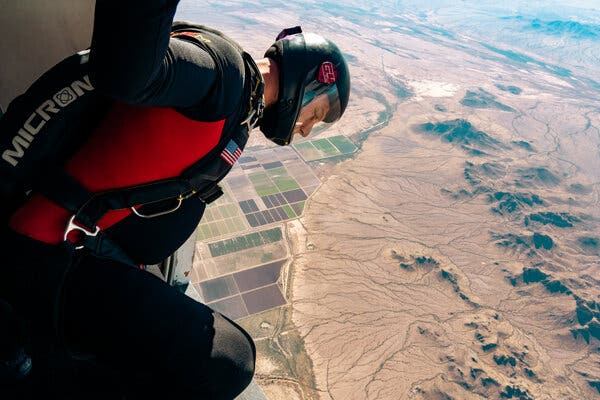 In October, at the United States Parachute Association Nationals in Arizona, Lobpries became the fastest athlete in the sport when he reached a speed of 318.74 m.p.h. That exceeded his previous world record of 316.23 m.p.h. Maxine Tate, a fellow American competitor, also broke her own women’s world record, increasing her speed from 275.8 to 285.27 m.p.h. Those records blow by the top speeds of NASCAR, IndyCar and Formula 1 drivers, who have never surpassed 260 miles per hour in official competitions.

It’s a sport for people who have flung themselves out of planes with such frequency that the simple act of strapping on a parachute and staring at a 13,000-foot drop no longer offers an adequate adrenaline rush.

“It’s not like we have jet boosters on,” Lobpries said. “In theory, there’s a maximum speed that I could attain. I could literally graph it out with an equation. But if my shoelace comes untied, or if my angle is just one degree off, or if I’m fatigued, I won’t get anywhere close to that top speed. There’s a human element to all of this, and that’s what makes the competition so exciting.”

Lobpries first developed his taste for skydiving as a freshman at Texas A&M University. He did two tandem jumps — amateur skydivers must be physically fastened to an instructor — and was hooked. He joined the Marine Corps and chose a flight contract, ultimately becoming a helicopter pilot. In 2010, when he was stationed at Camp Pendleton, he started spending his weekends jumping around Southern California.

He quickly advanced to wingsuit flying, which involves wearing a specialized suit that helps the jumper increase their surface area and remain in the air longer. By 2016, Lobpries had set the world record for the longest horizontal distance flown in a wingsuit, traversing nearly 19 miles through the sky after exiting the airplane. When he heard about speed skydiving for the first time a few years ago, he knew he had to try it.

“What really drew me to the sport was its simplicity,” he said. “In wingsuiting, you’re competing in three different categories — time, distance and speed — and there are boundaries you have to stay in. With speed skydiving, you just jump out and see how fast you can go.”

For Tate, speed skydiving has been the culmination of what she calls her “second life.” In her first life, she was a finance director for a media company in London. Then, in 2004, when she was in her early 30s, she took a vacation on New Zealand’s North Island. On a bus drive home from a hike, she saw a skydiver from the window of a bus and decided to try it. Two months later, she had her license. Two years later, she’d quit her job to go full-time in skydiving.

She’s done everything from formation diving, where a team of divers create patterns during free fall; to canopy piloting, which tests a pilot’s ability to fly a parachute at high speeds and low altitudes through an intricately designed course.

“It would be like someone in track and field doing a 100-meter sprint, hurdles and a marathon,” she said of her range in the sport. “They’re all technically running, but they involve totally different skills.”

Speed skydiving poses quite a few challenges that make the competition compelling. For one, technology hasn’t caught up to the sport. Tate and Lobpries wear tight nylon suits to reduce wind drag and tape down their zippers and shoelaces so they don’t turn into tiny tormentors. (“I once had a loose zipper that ripped out a patch of chest hair and left me raw and bruised,” Lobpries said.) Lobpries, who normally wears a large helmet, squeezes his head into a small one during competitions to reduce drag.

Competitors also aim to maintain rigid body control and focus to reduce drag. Even a slight crane of the neck can lead to what they call “the wobbles,” where the body starts shaking and air resistance can significantly reduce speed.

“If you continue to minimize the drag as you go through the dive and get tighter and tighter and longer and longer, you can continue increasing velocity,” Tate said. “Ultimately, you’re trying to get to true vertical. That’s what keeps the accelerator pedal going. You end up walking this very fine line between speed and control.”

To measure their speed, the skydivers wear two GPS monitors called FlySights, which are duct taped to them by judges before the competition. They jump from between 13,000 and 14,000 feet and are monitored continuously during a 7,400-foot window that ends at 5,600 feet above the ground. The fastest three-second average during that window is recorded as the divers’ speed, and the one with the highest speed average after eight jumps wins.

“Being a judge right now is really neat,” said Alixandra Raymond, the chief judge for speed skydiving at this year’s nationals. “When I take their FlySights and plug them into the computer, I can’t wait to see how fast they’ve gone. At this point, people are constantly breaking world records.”

But it’s hard for the competitors to tell how fast they are going in the air. “Think about driving down the freeway with the windows open going 70 miles per hour,” Tate said. “Could you tell the difference between 70 and 75? Now think about the fact that we’re going four times that speed — and we’re not in a car.”

The most problematic part of the jump is often during deceleration, when the margin for error is slim. When they’ve crossed the lower boundary, Flysights sends a signal to the divers’ earpieces.

If Lobpries stayed in position and maintained his free-fall speed of 463 feet per second past the 5,600-foot mark, he would smash into the earth in about 12 seconds. The other major risk in the entire endeavor is premature parachute deployment. “We’re taking this equipment to speeds where it hasn’t been tested,” Lobpries said.

To slow down, divers attempt to curve their bodies back to a horizontal position in about five seconds. But sometimes, a shift in wind or an errant movement can cause them to “cork,” their bodies snapping 90 degrees in an instant. It can feel like being in a car accident.

But Tate and Lobpries and others are willing to endure the pain and accept the risks. To them, it’s part of being a pioneer in a sport when it’s still pure. Although other adventure sports have recently seen huge technological improvement in their gear, with everything from fitness trackers to microfiber fabrics becoming more functional, speed skydiving is still in its early days. Lobpries and Tate imagined a future with aerodynamic helmets or custom fabrics for their jumpsuits or low-profile GPS trackers, all of which would reduce air resistance.

But for now, for those few seconds in the sky, all that matters is speed. And neither Tate nor Lobpries feels they’ve fallen as fast as they can yet.

“We’re at the point where we’re almost defying physics,” Lobpries said. “What will we do next?”

On TV, Wayne Gretzky Finds Himself as the Rookie

N.F.L. Playoff Predictions: Our Picks in the Divisional Round

University of Michigan Will Pay $490 Million to Settle Abuse Cases