The expanding incorporation of technology into sliding sports is happening with one overarching goal: making sleds faster. Virtually every country with aspirations of winning Olympic medals at this month’s Beijing Olympics in bobsled, skeleton and luge is now aligned with a racecar designer, aeronautics expert or rocket scientist.

They will chase those medals at China’s Yanqing National Sliding Center, where the track’s 16 winding curves are designed to resemble a dragon and three uphill sections, including a 360-degree turn, were constructed with one overarching goal: slowing the sleds down.

“All teams are aiming to get faster and that’s the name of the game,” said Dwight Bell, the general secretary of the International Luge Federation, the sport’s global governing body. “But you don’t want the sled speeds to exceed what the track has been designed for.”

The tension of those competing interests comes as luge, bobsled and skeleton are still in the beginning stages of understanding the long-term effects of athletes hurling themselves down icy chutes at blistering speeds, as well as the relationship between those sports and brain injuries.

In recent years, a growing number of bobsled and skeleton athletes have reported chronic conditions like headaches and fogginess that are most often associated with contact sports like football, ice hockey and boxing. Three North American bobsledders have died by suicide since 2013, including Pavle Jovanovic, a member of the United States bobsled team at the 2006 Olympics, who died in 2020 at age 43. 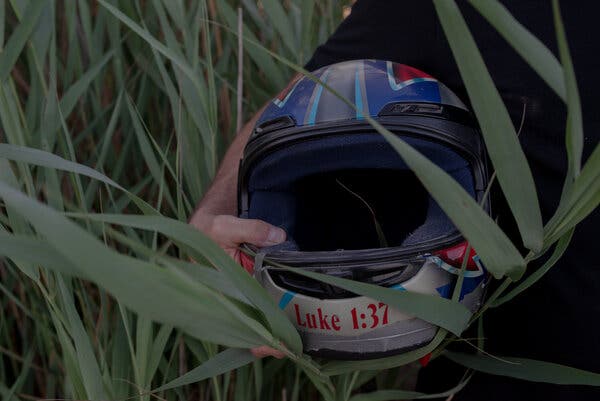 “That’s a fundamental conflict in the sport,” said Aliyah Snyder, a neuropsychologist at U.C.L.A. who is working to develop safety protocols in sliding sports. She added: “The emphasis has always been on going faster. But the fallout of that is there are limits.”

In 2021, researchers concluded that Jovanovic had developed chronic traumatic encephalopathy, or C.T.E., a degenerative brain disease found in athletes and others who have sustained repeated hits to the head. He is believed to be the first athlete in a sliding sport to be found with C.T.E.

Luge athletes experience some of the same forces as competitors in bobsled and skeleton, but they race feet first and are equipped with a support strap that can reduce head trauma. Still, luge often produces the highest speeds in sliding sports, and in 2010 Nodar Kumaritashvili, a 21-year-old luge athlete from Georgia, died during a training accident before the Vancouver Olympics.

Head Injuries and C.T.E. in Sports

The permanent damage caused by brain injuries to athletes can have devastating effects.

The potential consequences, though, can be an afterthought amid the racers’ quest for speed, adrenaline and victory.

Jayson Terdiman, 33, an American luger and two-time Olympian, has jumped from a plane. For him, luge provides much more of a thrill.

“We start really young and really low and they feed you that addiction very slowly to hook you,” said Terdiman, who recently retired after not qualifying for the Games. “And then, by the time you’re old enough to realize that what you’re doing has consequences, it’s too late. You’re already fully in love with that feeling and that rush.”

Snyder, a former skeleton athlete for Israel’s national team, experienced both the rush and the consequences. She said she sustained five or six concussions before a doctor told her to choose between the sport and her brain. But crashes, Snyder said, are just part of the concern: The cumulative effects of rattling vibrations felt on the rides may be just as important.

She has joined Peter McCarthy, a neurophysiologist at the University of South Wales; Christina Smith, a retired Canadian Olympic bobsledder; and Mark Wood, a longtime skeleton coach, in an effort to make the sport safer. They developed a survey involving concussion and injury histories that they hope to soon disseminate to prominent sliding athletes, but they haven’t yet received cooperation from governing bodies.

Christina Smith with her bobsled at Canada Olympic Park in Calgary, Alberta.Credit…Amber Bracken for The New York Times

Smith has struggled with a range of issues, including depression, anxiety and memory loss, since retiring from competition in 2004. She cited the death of Adam Wood, a Canadian bobsledder who died by suicide in 2013, as a reason she has taken her symptoms seriously. An examination revealed damage to her brain.

“I completely believe that this is the hidden pandemic, the brain injuries in sports,” Smith said.

One problem, scientists and former athletes said, is that sliding-sports athletes often risk their own financial security to bankroll their Olympic dreams. As a result, there is little incentive for them to self-report injuries — and remove themselves from valuable training time or competitions. One symptom of concussions, those experts noted, is the reduction of choice-making ability, a lesson Snyder said she learned from her own experiences in skeleton.

Britain’s Amy Williams, 39, won a gold medal in women’s skeleton at the Vancouver Olympics in 2010. She recalled being taken aback by the track’s speed and pushing to the back of her mind the tragedy that had occurred only days before it was her turn to compete.

Williams retired after the Vancouver Games. In the years since, she has undergone four major knee operations, she said, and suffers from constant headaches and sharp pain down her legs.

“Sort of the pain of my life,” Williams said. “They’re quite regular in skeleton, unfortunately.”

For the next Games, which took place in 2014 in Sochi, Russia, designers of the Olympic track created three uphill sections that reduced speeds by about 10 m.p.h. from the ones recorded at the track in Vancouver, British Columbia.

Speeds may be even more tempered at the Yanqing National Sliding Center in Beijing. The track’s defining feature is the Kreisel, a large circular curve in the middle of the track where Americans reported losing speed during training sessions.

“The Kreisel is actually pretty difficult to find speed through,” said Chris Mazdzer, who earned a silver medal in men’s luge at the 2018 Winter Olympics.

Gone are the days, too, when Mazdzer, 33, would sand down and shape his own sled. In Beijing, he will compete on one that the National Science Foundation helped finance.

The foundation awarded a grant to U.S.A. Luge, which partnered with Doug Bohl and Brian Helenbrook, mechanical and aeronautical engineering professors at Clarkson University, and Colby Mazzuca, who runs a computational fluid dynamics company and previously worked in NASCAR for Richard Childress Racing.

Any speed gained through technological breakthroughs will likely be microscopic in a sport timed to fractions of a second. The group sought those infinitesimal acquisitions by testing shapes on computer models to arrive at an ideal one to reduce drag on sleds.

Bohl has worked with U.S.A. Luge for more than a decade. His son, Bailey, showed interest in the sport and Bohl followed, becoming the president of the Adirondack Luge Club. It didn’t take long for him to wonder how he could improve a shed’s shape given his background.

“From the aerodynamic side, a slider on a sled is pretty streamlined already,” Bohl said. “But what you want to do is to shape the air as it’s coming off the back of the sled, so that it comes off the slider and the sled smoothly.”

Now Bohl is part of the global hunt for speed. Each country’s research is proprietary. McLaren Applied Technologies works with the British Bobsleigh and Skeleton Association. BMW partnered with Germany’s teams.

All are pushing up against new limits in the global hunt for speed. Many of the sport’s older tracks — including one in Altenburg, Germany, that has been nicknamed “Altencrash” by competitors — are still in circulation. But nearly all of the world’s newer facilities are aimed at limiting how fast athletes, or technology, can go.

“Athletes will always want to be faster and improve themselves because that is the nature of what we are and do in whatever sport you choose,” said Shelley Rudman, 40, who won a silver medal for Britain in women’s skeleton at the 2006 Winter Olympics. “It is also right that tracks have safety of the athletes in mind.”

One of the large curves that help decrease speed at the Yanqing National Sliding Center.Credit…Doug Mills/The New York Times
Tags
Brain Sai̇d She Speed That

Doubles Tennis Is Wimbledon’s Best Kept (and Most Fun) Secret

Kyrgios, Under a Hotter Spotlight, Stays Quiet and Wins Again