YAHIDNE, Ukraine — The elementary school’s former custodian carefully turned the key to the green door leading to the basement and walked down the stairs, shining a flashlight. Eventually, he paused the beam on a calendar scrawled on the cement wall and on the list of names alongside it.

It is how the people imprisoned there by Russian occupiers kept a record of who died and when.

“People were dying, people couldn’t take it,” said the former custodian, Ivan Petrovich Polhui. “There was not enough air. We spent a month there — 28 days.”

Mr. Polhui has become something of an unofficial keeper of the memories of the school and of the suffering that Russian soldiers inflicted there in March, when they held him and more than 300 of his neighbors, including children, in the dank and desperate confines of the basement.

Before the war, the elementary school had been a center point in the community. Mr. Polhui, whose grandchildren attended the school, said that there had been many happy memories made there before the Russian invasion.

Now, the children in the area attend other schools or take classes online. And while the Russian forces have gone, the trauma lingers for those who were held in captivity, with the still-intact elementary school serving as a daily reminder of their experiences.

Ivan Petrovich Polhui opening the door to the basement where he and other villagers were held. The writing on it reads, “Caution Children.”Credit…Brendan Hoffman for The New York Times

Mr. Polhui said the Russians had gone house to house rounding up every villager, and even some people from surrounding areas, to put them in the school. For many, he said, looking back on those harrowing days has been difficult.

“When we were in there, none of us believed we would stay alive. We were all preparing for our own death,” Mr. Polhui said. “A lot of people just went crazy,” he added, while others fled the village after it was recaptured by Ukrainian forces in April and have yet to return.

Yahidne is only one of countless communities around the country grappling with the devastation of the war, as residents continue living alongside these sites of oppression.

Some previously occupied parts of Ukraine have swiftly moved to conceptualize memorials or repair areas where the fighting has left physical scars. In Irpin, a suburb of Kyiv, the Ukrainian capital, there are plans for a memorial at a bridge where a number of civilians were killed while trying to flee. For now, wooden crosses offer a makeshift tribute.

In Bucha, another suburb of Kyiv, human remains found in mass graves left behind after Russian troops were ousted have been painstakingly documented and identified, and small memorials have been erected.

But in many smaller towns, like Yahidne, discussion about what to do with sites — once the hearts of smaller communities but later places of horror under Russian occupation — has stalled.

Wooden crosses, to commemorate those killed in Irpin, near Kyiv, Ukraine’s capital, at the site of a damaged bridge that connected Irpin to Kyiv.Credit…Ivor Prickett for The New York Times

“There is this tension between the scene of the crime, so to speak, and the necessity to preserve the evidence and to collect the evidence,” said Karen Remmler, a professor at Mount Holyoke College in Massachusetts who studies how to memorialize atrocities. “And there is the question of how much time needs to pass before the community can own that space and decide what to do with it.”

Yahidne, around 90 miles north of Kyiv in the northern Chernihiv region near the border with Belarus, was occupied by Russian forces on March 3. More than 300 people, including 77 children, were marched from their homes at gunpoint and forced into the cramped basement of the Yahidne elementary school. ​At least 10 people died there, some from disease, and at least 17 others were believed to have been killed by the Russian military, Ukrainian officials said.

They were used as human shields to protect Russian forces who had set up a base in the school, and they spent the four weeks in near-total darkness. Small groups were allowed out for a few minutes each day to collect food and water and to use an outdoor toilet, Mr. Polhui and Ukrainian prosecutors said. But with no running water in the basement, they also had to use buckets inside. Many became ill.

Those who died were left in a small adjoining room as the villagers pleaded to be allowed to bury their neighbors. By the time the remaining residents emerged on April 1, many were deeply scarred.

The local military administration in the Chernihiv region said that because a pretrial investigation is still underway in, it is too early to discuss the fate of the school. And it noted that the full extent of the crimes committed might still not be understood, as many of the victims are not ready to talk about it.

Mr. Polhui said it had been difficult for many to look back on the harrowing days in the basement. “We were all preparing for our own death,” he recalled.Credit…Brendan Hoffman for The New York Times

Some villagers have fled the country or relocated elsewhere. But for those who stayed, who are also dealing with worries about surviving the coming winter in heavily damaged homes, the violence that ruptured their lives is never far from mind.

Nadiia Skrypak, 66, was biking past the school when she spotted Mr. Polhui outside and was eager to speak about her own experience, despite the obvious pain it caused her. She recounted her confinement as vividly as though it had just happened the day before.

“They were shooting, near the houses,” Ms. Skrypak said. “A mine exploded in the yard. It was terrible,” she said, and turned to her neighbor, overcome with emotion. But it is when she talked about what happened inside the school’s basement that her voice grew pained.

“They gathered all of the villagers there,” she said as she gestured toward the school, her voice cracking with emotion. Her mother, 86, was held there, too, Ms. Skrypak said, adding, “in the room where we were staying, the most people died,” before trailing off.

Her mother, Hanna Skrypak, has lived in the village for 45 years and has no intention of leaving. The elder Ms. Skrypak said she still asked herself why she was spared while others perished during their ordeal.

“I think, ‘I am old, no one needs me anymore’ — that’s how it seems to me,” she said. “And people died in that basement. But I survived.”

Hanna Skrypak, 86, in her yard. She survived in the basement and still asks herself why she was spared while others died.Credit…Brendan Hoffman for The New York Times

Mr. Polhui was the school custodian for years, which is why he still has the keys. As he led several New York Times journalists around the building, he described how much he had enjoyed his work there before the war. The school is only a few minutes by foot from his home.

Now, the memories of being detained hang like dark clouds over those happier times. As he walked through the basement, he pointed out the numerous drawings scrawled by children on the walls. He and a few others were allowed to bring crayons from the classrooms into the basement so that the children would have a way to pass the time.

Upstairs, where Russian soldiers had lived for weeks, children’s lesson books are scattered haphazardly across the floor, small heaps of cigarette butts sitting atop them. The colorful murals that adorn the hallway and classroom walls are chipping, some riddled with holes from shrapnel. Soldiers’ uniforms are still on the floor.

“Look at the mess they left,” Mr. Polhui said, shaking his head as he pointed to the rations issued by the Russian army that remained.

On the door outside the basement is a poster of a photograph taken while the villagers were held there. Though Russian forces confiscated their cellphones, Mr. Polhui said that one woman was able to hide hers and covertly took some photographs before the battery ran out.

A door in the basement of the school. To the left is a list of people who were executed by Russian forces. To the right, a list of those who died, some from disease.Credit…Brendan Hoffman for The New York Times
Drawings left behind by children. Some were allowed crayons to pass the time.Credit…Brendan Hoffman for The New York Times

This visual account and testimonies of the villagers have been vital to early efforts at accountability. In the immediate aftermath of the attack, Ukrainian investigators dug up the remains of those who were buried by Ukrainian soldiers and residents outside the school and worked to identify them.

The Ukrainian prosecutor general said in a statement this month that eight of the Russian soldiers who are believed to have held the villagers in the basement had been identified and summoned for a pretrial investigation. A logbook with photographs of one of the military units that occupied the area was found after Russian troops retreated and became vital evidence for investigators.

As in so many instances in this war that has prompted thousands of criminal investigations, none of the Russians identified as perpetrators are or will most likely be in custody.

But Dr. Remmler, from Mount Holyoke, said that accountability had been essential for healing in many of the communities that she had studied that have experienced similar violence. And even more important than the creation of a memorial is the ability to collectively deal with and confront the trauma, she said.

“It’s the process that really matters,” she said, “not necessarily the outcome, or the actual mortar and cement of a memorial itself.”

A view of Yahidne from the second floor of the school, which Russian troops occupied while holding the villagers captive.Credit…Brendan Hoffman for The New York Times

She said the path forward would be a deeply complex one for a community grappling with the stain of violence they now associate with a once-beloved school.

“People might disagree on what to do with the space, or some people might just want to move away,” Dr. Remmler said, while others may want to honor the bravery and resilience of survivors.

“I don’t think one size fits all,” she said. “These are very messy processes.”

So far, no one in the village seems to know what the plans are for the school building, Mr. Polhui said. But his family’s attention is more focused on getting through the worst of the war.

His days are now spent harvesting his apples, tending to his animals and preparing for a cold winter in his damaged home.

“This is the way we will survive,” he said. “We are just focusing on how we can survive.”

A broken wall leading from the school to the surrounding forest in Yahidne. Many are still grappling with what happened in the village and how to process it.Credit…Brendan Hoffman for The New York Times

Tags
Said That Time Who With

The first train in nine months leaves Kyiv for Kherson.

What Is Next for the FTX Fallout? 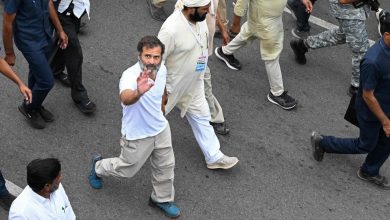 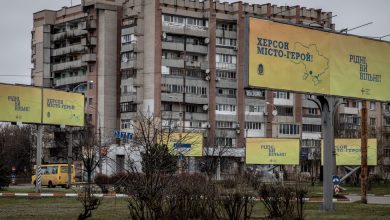