Bed Bath & Beyond, the beleaguered home goods retailer, said on Wednesday that it planned to close 150 stores and slash spending as it looked to stabilize its business by revamping its operations and raising extra cash.

The retailer, which is also considering layoffs, said it had secured $500 million in new financing, $375 million of which comes from a loan by the investment firm Sixth Street.

The funds will buy the retailer time to execute a turnaround strategy focused on increasing foot traffic and stocking its stores with more products that shoppers want to buy. It wants to recapture the market share it lost to rivals as shoppers pull back on spending. The company has about 1,000 stores.

The retailer has been weighed down by double-digit declines in sales, negative cash flow, supply chain woes and a shift in consumers’ shopping habits away from spending on redecorating their homes at the high levels in earlier stages of the pandemic.

Bed Bath & Beyond also provided a grim financial update for its fiscal second quarter, which ended on Aug. 27. It said its comparable sales fell 26 percent from the year before and it recorded negative cash flow. It now expects to spend $250 million on capital expenditures this year, it said, sharply down from a previous plan of $400 million.

The company’s share price fell more than 20 percent in premarket trading, pulled down by an announcement on Wednesday that it planned to issue 12 million additional shares to raise more money, a move that takes advantage of the company being embraced by meme-stock traders in recent months. The stock has been on a wild ride this year, with rapid rises followed by equally steep declines, like the one on Wednesday.

Analysts and shoppers have felt that Bed Bath & Beyond has strayed from what once made it a major player in its industry. The company said that it would focus on national brands, a reversal of its emphasis on expanding its private-label brands, which didn’t resonate as much with customers as it expected. It said on Wednesday it would discontinue a third of its private-label brands, several of which it rolled out in the last year and a half.

“The most important thing to keep them afloat in the long term is added capital,” Seth Basham, an analyst at Wedbush Securities, said in an interview before the company announcement. Next, changing the company’s “value proposition” is important, he said, and “that second part is the harder part.”

Bed Bath & Beyond is still working with an executive search firm to find a permanent chief executive, after Mark Tritton, who held the top spot since late 2019, left in June. “We are in the earliest phase of the search process and will provide an update when appropriate,” the company said.

The Next Step in the Anti-Abortion Playbook Is Becoming Clear

Moosewood, the Beloved Vegetarian Restaurant, Prepares for Its Second Act 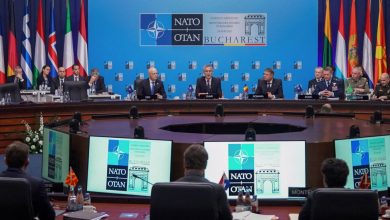