Natalie Mendoza walked away from “Spider-Man: Turn Off the Dark,” and figured she would never work on Broadway again.

That was 11 years ago, and now the 45-year-old Australian actress is back, starring in “Moulin Rouge! The Musical,” a title with which she has a singular history: Mendoza, who succeeds Karen Olivo in the role of Satine, had a small part in the 2001 film from which the Tony-winning show is adapted; she is the only member of the film’s cast performing in the stage musical.

Born in Hong Kong to a Filipino jazz musician and an Australian dancer and television personality, Mendoza grew up in Sydney and Melbourne, with five artistically inclined siblings, and has led a nomadic life. She has lived in Asia, Europe and America; worked in music, film, television and theater; and has repeatedly left the performing arts for school (most recently, she studied French and French history at the Sorbonne) and spirituality (she has spent time at Vedic and other monasteries).

Mendoza as the doomed Parisian chanteuse in “Moulin Rouge! The Musical.”Credit…Matt Murphy
And as the villainous Arachne in “Spider-Man: Turn Off the Dark.” She left the ill-fated show before opening night. Credit…Sara Krulwich/The New York Times

In 2010, she was cast in the ill-fated “Spider-Man” as Arachne, a villainous spider, but left during previews after suffering a concussion and then witnessing an actor injured in a fall. That was not her only difficult experience with the entertainment industry; in 2017 she said that 15 years earlier Harvey Weinstein had groped her while she was working on a film he was producing.

But in an interview earlier this month at the apartment tower where she is staying, she said she loves being onstage, and hopes to become a director.

These are edited excerpts from the conversation.

We’re talking in a conference room because, citing Covid, “Moulin Rouge!” won’t let me backstage. So let’s just pretend we’re in your dressing room. What would I see?

They have this tradition here where you’re allowed to paint your dressing room. First, I felt a little ridiculous, and then I went for a light violet. I wanted something very peaceful and tranquil. There’s a prayer of St. Francis, to remind me to be a better person every day. And beautiful art. I collect art. 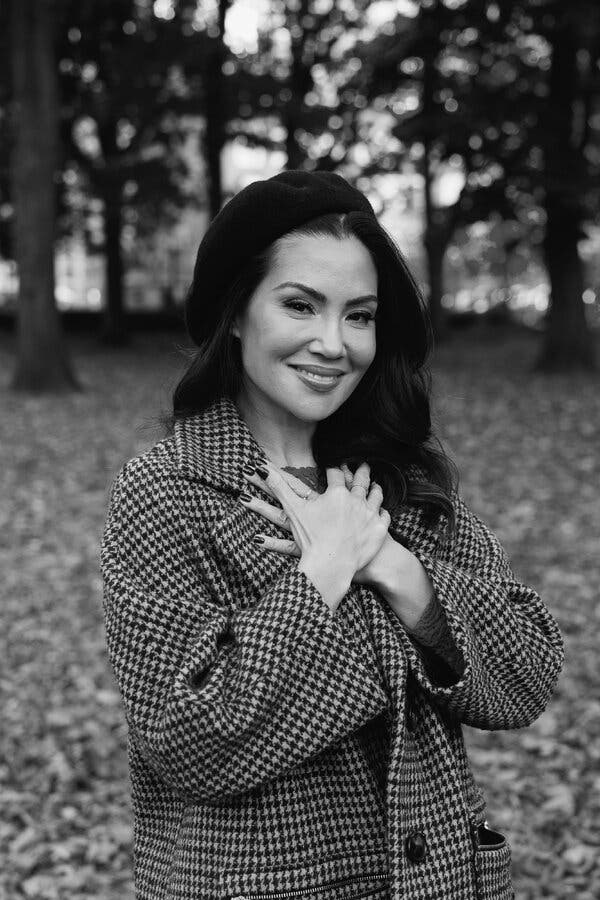 “You think you’re enlightened on top of a mountain, and you go back into the city and you’re like, ‘How awake am I in this stressful setting?’”Credit…Mark Elzey for The New York Times

And do you keep a good-luck charm, or mementos?

Not really. I’ve checked out of my career many times. I became a seeker very early. I learned meditation, and on and off I’ve been a monk, so when I say I’ve left, I really left. And so to re-engage with the world is always a little bit of a shock. It’s sort of Larry Darrell in “The Razor’s Edge.” You think you’re enlightened on top of a mountain, and you go back into the city and you’re like, “How awake am I in this stressful setting?”

I want to come back to spirituality, but let’s start with “Moulin Rouge!” How did you wind up in the film?

Many, many moons ago, when I was still living in Australia, I had been cast as Eponine in “Les Misérables.” Baz [Luhrmann] came to see “Les Miz,” because he was wanting to cast Satine, and I ended up at the final audition at his house in Sydney with his whole crew of creatives and bohemians. And we basically workshopped the role.

A couple of weeks later, I heard that the glorious Nicole Kidman got the role, which didn’t surprise me. But Baz kept calling me, and saying, “Listen, we want you involved; we’re going to create a character for you,” and sure enough, that’s what happened. He created China Doll. It set my career in a different direction. All the people I met on that film set helped shape my tastes. This girl from the suburbs of Australia suddenly started dreaming about the streets of Paris, and life in London.

You had taken a break from performing when you were cast in the London production of “Here Lies Love,” which is how you met Alex Timbers.

Being an Asian actress, I would see other young actresses careers take this very clear trajectory, [but] I would play a really interesting role, and then all of a sudden I’d drop off because there wasn’t another role to continue that upward trajectory. Rather than wait around, I’d just go off to India, or go off and study something, and then I’d pop back in. The National Theater contacted me just when I’d left a monastery that I’d been at for a year. So that was a dream come true. And it was hugely successful, and then I just disappeared again.

Mendoza and Aaron Tveit in “Moulin Rouge!” She replaced Karen Olivo, who originated the role of Satine onstage.Credit…Matt Murphy

Now it’s six years later; Timbers is directing “Moulin Rouge!” and he reached out to you again.

It had been so long. I just thought, “Can I do this?” Even when I’m not in a monastery, I still very much live that lifestyle. I’m very quiet. I teach meditation. I don’t speak a whole lot. I certainly don’t sing. But I just threw caution to the wind. And I realized I knew this character, because I was there right at the beginning.

Karen Olivo, who originated the role of Satine onstage, left citing abuses in the industry. Did that concern you?

I messaged her, before opening night, and I just thanked her, because she’s part of this character. I’m benefiting from a lot of the work that she did. And it’s always wonderful when a woman wants to take a stand based on her principles. I know that she cared deeply about the company and the cast, and she was incredibly gracious in saying that she was happy to leave the show in my hands.

You had your own experience speaking up, about Harvey Weinstein.

It was actually incredibly clumsy of me. The way it was portrayed in the press was far more heroic than the truth. I was reading an article about an actress [who was describing her] experience, and he sort of had a script, and I had encountered the same script. My initial impulse was to comment [on Facebook], and somehow it got leaked.

He affected the arc of your career?

I had signed a three-picture deal. But after that first movie, I decided Hollywood’s not for me, because I could see the cost. I never see myself as a victim. The thing is Harvey can only be Harvey because there’s a collective agreement that allows it to happen. We’re now seeing these collective shifts, these waves of a change, which is so beautiful. But at that time, that wasn’t going to happen. And so I just went off and kept being an artist in the way that I knew how. But of course, it affected my career. My career was full of potential at that point — I was young and I had some great opportunities, but I took the quieter road.

You’re sort of a child of the world. How do you think about your own identity?

I do think of myself as a citizen of the world. Growing up in Australia, I was literally like one of two Asian girls in my school year. So I never identified with being Australian. I couldn’t relate to the culture. I would look in the mirror and I would see an Asian girl. And I was drawn to all things Asian. I then left. I started touring and living all over Asia by the age of 16. I was connecting with the different spiritual traditions. And this is what piqued my interest early and then I just started seeking out my own path.

“It’s always those devastating blows that propel you, if you allow them to,” Mendoza said.Credit…Mark Elzey for The New York Times

Speaking of your path, I looked through your Instagram and you mention Transcendental Meditation, Christ, the Divine Mother, the Buddha, Lao Tzu, Ram Dass, Rumi, a Hindu god, Saint Francis of Assisi. What’s going on?

I really honor the essence that permeates all the great faiths, including the faith of quantum mechanics. The intelligence that allows a flower to bloom. That invisible essence that connects and permeates all. We see the crema on top of every great faith. There’s just this commonality that they all share, which is love and peace and compassion. I’m a fan of all of them and a devotee of all of them.

Your last Broadway appearance was “Spider-Man.” You left after a concussion. Tell me what your thinking was about coming back.

I realized there’s some unfinished business here, because it brought up some strange feelings, like, “Do I want to revisit that?” And I didn’t think I’d ever get a chance to perform on Broadway again, because sometimes when things like that happen, you become untouchable. “Oh, you know, she was part of that production.” And so the opportunity to be given this chance, and to change the narrative, because I’m certainly not a quitter — it is the last thing I would ever have expected, but it’s incredibly beautiful to be doing this.

How do you view “Spider-Man” in the rearview mirror?

It’s its own Greek myth, isn’t it? It was a really powerful turning point for me. To get that close, and to suddenly not be doing it, was a pretty devastating blow. And at the same time, it’s always those devastating blows that propel you, if you allow them to, in a direction spiritually that can be the greatest gift of your life, and certainly that’s what happened. I am so thankful to have gone through that experience, and also to carry so many of the lessons from that experience into this experience. It’s all beautiful.

When I heard you got this role, the first thing that occurred to me is that Satine flies. Did that freak you out?

Not at all. People thought I left that show because I was scared, and I wasn’t. I was making a stand. People’s safety is important, and it wasn’t my safety I was concerned about. I’m a rock climber. I’m not scared of heights. I’m not afraid. I don’t think any show is worth putting anybody’s life at risk, particularly these dancers that have spent their entire lives training to be up on that stage. You have to treat those bodies with so much respect, because that’s their livelihood. I would never want stardom so much that I would compromise my own integrity. And I have no problem taking a stand for anybody.

Tags
All Had See She Ti̇me