New York became the first state to enact a temporary ban on new cryptocurrency mining permits at fossil fuel plants, a move aimed at addressing the environmental concerns over the energy-intensive activity.

The legislation signed by Gov. Kathy Hochul on Tuesday was the latest setback in a bruising month for the cryptocurrency industry, which had lobbied fiercely against the bill but was unable to overcome a successful push by a coalition of left-leaning lawmakers and environmental activists.

The legislation will impose a two-year moratorium on crypto-mining companies that are seeking new permits to retrofit some of the oldest and dirtiest fossil fuel plants in the state into digital mining operations. It also requires New York to study the industry’s impact on the state’s efforts to reduce its greenhouse gas emissions.

The move in New York comes months after some other states had adopted more friendly policies toward the industry, offering tax incentives in hopes of luring crypto-mining operations after China cracked down on the activity last year.

But it also comes at a moment of intense turbulence, and a potential crossroads, for the cryptocurrency sector.

Earlier this month, the crypto exchange known as FTX suffered a swift and public collapse that led to its declaration of bankruptcy. The fall of what had been a trusted player in the new market has led to broader questions about the future of the currency, and well as possible criminal charges for its principal, Sam Bankman-Fried.

Mr. Bankman-Fried had been in the process of lobbying New York regulators to permit his exchange to operate in the state. He is also a major Democratic donor who backed a super PAC that spent $1 million to boost Ms. Hochul’s running mate, Antonio Delgado, in his primary race earlier this year.

The spending drew accusations from Ms. Hochul’s political opponents, who argued it was a signal that the industry was trying to exert its influence to pressure the governor into vetoing the mining moratorium.

The State Legislature, which is controlled by Democrats, had passed the legislation in the waning hours of this year’s legislative session that ended in June, following successful lobbying efforts that also included winemakers and other concerned business owners upstate, where many of the existing mining operations are based.

For months, Ms. Hochul had remained noncommittal on whether she supported the bill, saying that her office was reviewing the legislation and that she was weighing concerns that a moratorium could impede economic activity in the region. The temporary ban was heavily opposed by national cryptocurrency industry groups which lobbied the governor’s office, concerned that other states might follow New York’s lead and impose moratoriums or other restrictions.

By distancing herself from the bill during the general election, Ms. Hochul avoided taking on a polarizing issue while facing a vigorous challenge from Representative Lee Zeldin, a Republican who opposed the bill, describing it as anti-business.

Ms. Hochul, a Democrat from Buffalo, beat Mr. Zeldin by a narrow margin two weeks ago. Since then, she has turned her attention to the hundreds of bills she must decide whether to sign or veto before the end of the year, including the moratorium.

In a memo explaining her support for the bill on Tuesday, Ms. Hochul said that as the first governor from upstate in nearly a century, she recognized “the importance of creating economic opportunity in communities that have been left behind.”

But she said the bill was “a key step for New York as we work to address the global climate crisis.”

Bitcoin mining — the process by which powerful computers solve complex mathematical equations to validate transactions — is a crucial part of the cryptocurrency economy. And while amateurs could once mine coins at home, the complexity of equations, and the energy needed to solve them, has soared with the growing popularity and value of Bitcoin.

But climate advocates have long said that the value of crypto-mining operations were not worth the environmental costs. The process requires an immense amount of electricity — so much so that China banned the practice last year in an effort to meet its climate goals.

The bill’s supporters have stressed that the legislation will not impact existing mining facilities or stop all crypto-mining activities in the state, just those seeking permits to re-power fossil fuel plants, leaving those that connect directly into the power grid or use renewable energy sources unaffected.

Supporters of the legislation celebrated its signing on Tuesday, casting it as a hopeful sign that New York’s move will set the tone for other states who may be considering regulations — a nightmare scenario for industry players.

“This bill will create the pause we need in the current trend of purchasing old power plants in New York for corporate profits and allow us to properly evaluate the impact of this industry on our climate goals before it is too late,” Assemblywoman Anna Kelles, a Democrat who sponsored the bill in the lower chamber, said in a statement on Tuesday. “Reactivating old retired power plants that use fossil fuels as an energy source is a move in the wrong direction and we cannot afford to go backward.”

Tags
Mining New York She That Was

The reporter behind the report of a Russian missile in Poland is no longer at The A.P. 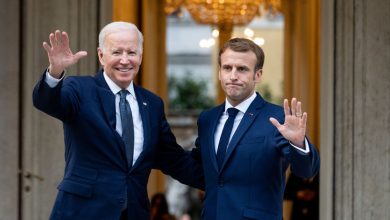