ODESA, Ukraine — The Odesa Fine Arts Museum, a colonnaded early-19th-century palace, stands almost empty. Early in Russia’s war on Ukraine, its staff removed more than 12,000 works for safe keeping. One large portrait remained, depicting Catherine the Great, the Russian empress and founder of Odesa, as a just and victorious goddess.

Seen from below in Dmitry Levitzky’s painting, the empress is a towering figure in a golden gown. The ships behind her symbolize Russia’s victory over the Ottoman Turks in 1792. “She’s textbook Russian imperial propaganda,” said Gera Grudev, a curator. “The painting’s too large to move, and besides, leaving it shows the Russian occupiers we don’t care.”

The decision to let Catherine’s portrait hang in isolation in the first room of the shuttered museum reflects a sly Odesan bravura: an empress left to contemplate how the brutality of Vladimir V. Putin, the Russian president who likens himself to a latter-day czar, has alienated the largely Russian-speaking population of this Black Sea port, established by her in 1794 as Moscow’s long-coveted conduit from the steppe to the Mediterranean. 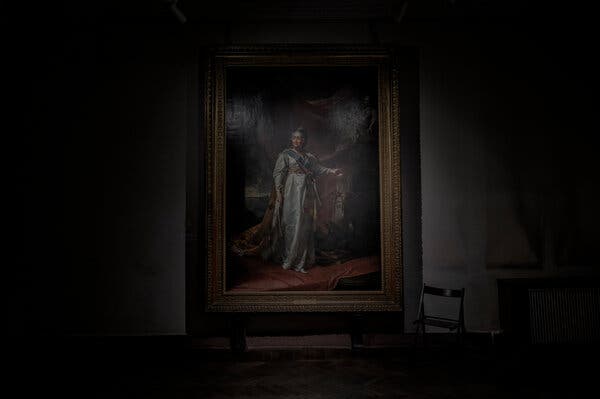 Catherine the Great, abandoned. “Leaving it shows the Russian occupiers we don’t care,” a curator said of the painting.

Playing chess in Sobornaya Square, located in the central part of Odessa.

Odesa, grain port to the world, city of creative mingling, scarred metropolis steeped in Jewish history, is the big prize in the war and a personal obsession for Mr. Putin. In a speech three days before ordering the Russian invasion, Mr. Putin singled out Odesa with particular venom, making clear his intention to capture “criminals” there and “bring them to justice.”

Mr. Putin believed at the outset of the war that he could decapitate the Ukrainian government and take Kyiv, only to discover that Ukraine was a nation ready to fight for the nationhood he dismissed. As the focus of the fighting shifts to southern Ukraine, Mr. Putin knows that on Odesa’s fate hinges Ukrainian access to the sea and, to some degree, the world’s access to food. Without this city, Ukraine shrivels to a landlocked rump state.

A residential district in Odesa, which now finds itself in a war of disentanglement from Russia’s tenacious hold.
The Monument to the Unknown Sailor, a city memorial located at Shevchenko Park in Odesa.

“Odesa is the key, in my view,” said François Delattre, the secretary general of the French Foreign Ministry. “Militarily, it is the highest-value target. If you control it, you control the Black Sea.”