Long before the pandemic, the rampaging wildfires of this summer and the recent destructive flooding, British Columbia had declared another state of emergency. 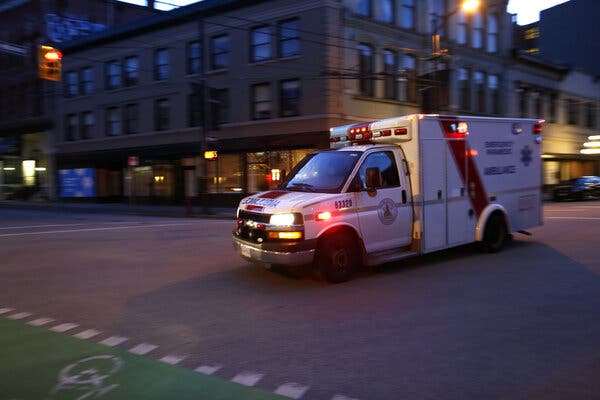 An ambulance driving through downtown Vancouver as the local health unit has started prescribing a “safe supply” of opioid alternatives to combat overdoses.Credit…Jesse Winter/Reuters

Five years later, things are only worse. This week, British Columbia announced a grim record. Lisa Lapointe, the province’s chief coroner, said that 201 people had died from overdoses in October, the most ever in a single month. And the cumulative total of 1,782 overdose deaths for 2021 is already the highest number in one year, with two more months of data to come.

British Columbia is not alone in overdose-related grief. Because of fentanyl, in large part, opioid deaths and overdoses have worsened across much of the country, urban and rural, with Alberta and Ontario also particularly afflicted.

When Ms. Lapointe announced British Columbia’s latest terrible numbers, she also called on provincial governments to give the drug crisis the same sort of urgent attention and resources that have been brought to bear against the pandemic, particularly with vaccination.

“This is not an issue that’s going to go away without intensive change and involvement of a variety of levels of government,” she told a news conference.

Paramedics responding to an overdose in Vancouver in June.Credit…Jonathan Hayward/The Canadian Press, via Associated Press

Among politicians and public health officials, there’s general agreement about what perhaps is obvious: The current system of laws surrounding drugs isn’t working when it comes to preventing drug-related deaths and overdoses. But exactly what will work and what’s possible politically are less clear.

The city of Vancouver and the province of British Columbia have asked the federal government for permission to decriminalize possession of up to 4.5 grams of illegal substances within the province. This week, Toronto’s board of health authorized Dr. Eileen de Villa, the city’s chief medical officer, to also seek the same exemption from Health Canada.

It’s a proposal that many police forces support.

“Over the years, we realized that we cannot arrest and charge our way out of this crisis — the opioid crisis,” Chief Gary Conn, of the Chatham-Kent police service and president of the Ontario Association of Chiefs of Police, told the CBC, adding: “What we’ve got to do is examine the underlying issues surrounding drug addictions.”

So far, the federal government said that it would carefully consider all decriminalization requests. This week, it also introduced a bill ending minimum mandatory sentences for some drug offenses.

But this week 21 organizations — a mix of public health, drug policy and drug users’ groups — published a joint plan that urged the government to go much further. It calls for full decriminalization of drugs for personal use, as well as the sharing and selling of drugs for “subsistence, to support personal drug use costs, or to provide a safe supply.” The groups are also asking that funds allocated to the police for enforcing drug laws be redirected to “non-coercive, voluntary policies, programs, and services” for drug users, including housing, social services, education and health services.

A supervised safe injection site in Toronto.Credit…Ian Willms for The New York Times

“The war on drugs has been a colossal failure,” Sandra Ka Hon Chu, the co-executive director of the HIV Legal Network, one of the groups behind the document, said in a statement. “Under a regime of criminalization, people who use drugs are vilified, subject to routine human rights abuses, and denied access to lifesaving health care.”

It’s an open question whether there’s the political will in Canada to go as far as the plan recommends. But Ms. Lapointe urged a swift expansion of a program in British Columbia for doctors to prescribe safe drugs to users to prevent overdoses and deaths — an idea few physicians have embraced.

“We don’t have time to wait months and years to continue to look for evidence that safe supply will work,” Ms. Lapointe said. “We know from studies it does work.”

Our colleagues at The Upshot are looking for testers from Canada for their next dialect quiz. If you’re interested in answering some questions about how people talk in your part of Canada, please click here. There are hundreds of questions currently; feel free to answer as many or as few as you wish.

A native of Windsor, Ontario, Ian Austen was educated in Toronto, lives in Ottawa and has reported about Canada for The New York Times for the past 16 years. Follow him on Twitter at @ianrausten.

How are we doing?
We’re eager to have your thoughts about this newsletter and events in Canada in general. Please send them to nytcanada@nytimes.com.

Like this email?
Forward it to your friends, and let them know they can sign up here.

Inside the Fall of Kabul

Girl, 11, Was Killed When One Teen Tried to Shoot Another, Police Say

The Humiliation of Amber Heard Is Both Modern and Medieval