UDVADA, India — From the porch of his century-old home, Khurshed Dastoor has a front-row seat to a tragedy that he fears may be too late to reverse: the slow extinction of a people who helped build modern India.

On the wall of his drawing room hang portraits of the ancestors who led prayers for generations of Parsis, followers of Zoroastrianism who escaped Muslim persecution in Persia 1,300 years ago and made India home. Outside, across a narrow alley, workers are once again renovating the majestic fire temple, where the marble has been polished clean and the stone of the outer walls treated with chemicals to resist decay.

Around him, emptiness encroaches. Only one or two families remain within the tastefully built houses on the surrounding streets. Moss grows on the brick-and-pillar walls. Weeds grow out of arched windows.

Congregants remain in some of those homes, Mr. Dastoor said, but many are too old and frail to attend services.

“I am 21st in the tradition,” said Mr. Dastoor, 57, pointing to portraits of his father, grandfather and great-grandfather, all priests. “By the time I live my life and I pass my legacy to my son, I doubt that the last of the houses will also be open.” 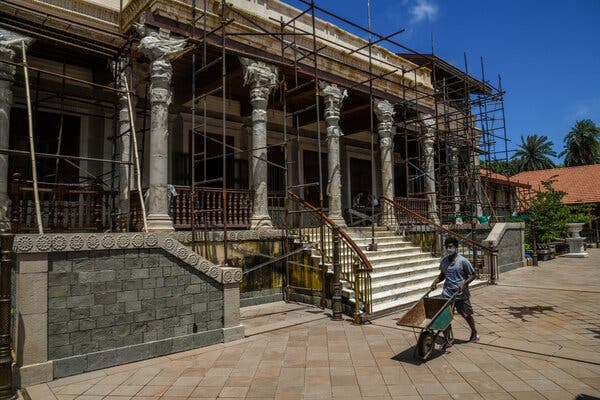 The fire temple where Mr. Dastoor, 57, leads prayers, as his ancestors did. “I am 21st in the tradition,” he said. “By the time I live my life and I pass my legacy to my son, I doubt that the last of the houses will also be open.”

Restoring elements of the Parsi temple, which workers are once again renovating.
The marble has been polished clean at the temple, and the stone of the outer walls has been treated with chemicals to resist decay.

The Parsi community’s legacy is deeply intertwined with the rise of modern India. Their dwindling numbers in part tell a tale of how orthodox religious rules have clashed with an early and rapid embrace of modern values.

Prominent Parsis include the founders of the vast Tata conglomerate, plus early members of the Indian independence movement and the Indian National Congress, once the dominant political party. The most famous Parsi outside India might be Freddie Mercury, the Queen singer, who was born Farrokh Bulsara.

But the community’s population, which totaled 114,000 in 1941, now numbers around 50,000 by some estimates. The drop has been so drastic that — even as India considers measures to discourage more children in some states — the government has incentivized Parsi couples to have more children, to apparently little effect.

Walk into a Parsi business in Mumbai, home to India’s biggest concentration of Parsis, and you’ll hardly see anyone under 50. Parsi restaurants have the feel of a senior citizens’ club.

That community in Mumbai sees about 750 deaths a year and only about 150 births, according to local leaders. In Surat, another city where Parsis made a name, deaths have almost tripled over the past three years, while births remain few.

“When your numbers fall, where are you going to find that same number of people who excel in their fields?” said Jehangir Patel, who edits the Parsiana, one of the oldest magazines dedicated to the community.

The question of continuity hangs over even the most renowned name in the Parsi community: the Tata family, which runs one of the world’s largest business empires.

Ratan Tata, the man sitting at the top of the empire, is 83. He never married and does not have any children.

Ratan Tata, 83, a Parsi, sits atop one of the world’s largest business empires. He never married and has no children.

“What one has watched, silently, is first the decline of excellence,” Mr. Tata said in an interview at his seafront home in Mumbai, where he lives with his dogs Tito and Tango. “There have not been as many leaders. And when there have been leaders, there’s been no next generation.”

Mr. Tata blames the influence of the orthodoxy over institutions such as the Bombay Parsi Punchayat, the body that manages the community’s affairs as well as thousands of apartments and other properties owned by Parsi trusts.

They strictly define who counts as Parsi: those who have a Parsi father. Community leaders estimate that up to 40 percent of Parsi marriages are with outsiders, but women who chose that are often ostracized. In some parts of the community, they lose privileges as basic as attending the final rites of loved ones.

They also lose the right to live in affordable Parsi housing, a big advantage in Mumbai, where property prices keep rising. Parsi leaders fear outsiders will work their way into the community to take advantage of those benefits, diluting Parsi culture.

The Tata family history plays a role. In 1908, community elders took Mr. Tata’s grandfather to court to prevent his French wife from being recognized as a Parsi, starting a series of events that established the precedent.

A Parsi museum in Udvada, India. The Parsis are followers of Zoroastrianism who escaped persecution in Persia 1,300 years ago and made India home.
The number of Parsis in India has been steadily dropping. The community’s population, which totaled 114,000 in 1941, now numbers around 50,000 by some estimates.
Parsis at a club in Mumbai. The Parsi community in Mumbai, the largest in India, sees about 750 deaths a year and only about 150 births, according to local leaders.

“We’re shrinking as a race,” Mr. Tata said. “And we have no one to blame but ourselves.”

Armaity R. Tirandaz, chairwoman of the Bombay Parsi Punchayat, said high priests wanted to ensure that changes don’t “wipe out the religious practices of our faith.”

Cries of “rules should be relaxed,” she said, were “only made by those who are not faithful or proud of the religion they are born in, or else feel a deficit in its precepts.”

“I feel if you cannot ‘conform,’ at least do not try to ‘deform’ it to suit your sensibilities,” Ms. Tirandaz said.

As factors for the dwindling, some Punchayat leaders point to migration to the West and an increasing number of young people remaining single.

Kainaz Jussawalla, a Parsi author based in Mumbai, said that, for professional and independent Parsi women, staying single is born of a dilemma: limited choice of partners within the community, and the discouragement that comes with marrying outside.

“Personally, I have made a choice to be single because the pool is smaller and finding a partner tougher,” she said.

For those who marry, the national government has offered assistance and stipends for older relatives to offset the cost of caring for parents. Parsis can receive about $50 a month per child under 8, and $50 per parent over 60.

The program has barely made a dent, supporting the birth of 330 children in its eight years, according to official numbers.

For Karmin and Yazad Gandhi, the program changed only their timing. The funds proved to be a blessing during the Covid-19 outbreak, when Mr. Gandhi — who organizes vacation tours to Europe — almost entirely lost his income.

Ms. Gandhi, who works at a consulting firm, said if it weren’t for the program, she probably “would not have had the second kid so fast — maybe five years apart or so.”

Women face a dwindling pool of men if they marry within the faith, said Kainaz Jussawalla, a Parsi author based in Mumbai.
Yazad Gandhi, in red shirt, at his home in Mumbai. He and his wife, Karmin, as parents of young children, receive assistance from a government program designed to help bolster the shrinking Parsi community.
Karmin Gandhi playing with her son. She said if it weren’t for the assistance program, she probably “would not have had the second kid so fast — maybe five years apart or so.”

Sarosh Bana, 65, a Parsi journalist who edits the publication Business India, cited rising living cost in places like Mumbai. Many Parsis would rather raise one child with a high-quality education inside a city than have larger families in suburbs.

“The Parsis wouldn’t want any compromises in their living standards and the quality of life,” Mr. Bana said. “You won’t see many Parsis hanging outside trains at 6 in the morning coming from the suburbs — they aren’t cut out for it.”

Some Parsis believe that the dwindling population will spur the appearance of a savior. Mr. Dastoor, the priest of Udvada, one of the oldest and most sacred temples in the faith, said such a messiah had been predicted to appear in 2000, 2007, 2011 and 2020.

“Whenever he comes, it’s a jackpot for us,” Mr. Dastoor said, but he added, “We can’t just sit around.”

Mr. Dastoor, like many community leaders, believes that the population has crossed a point of no return. He has given up on changing the minds of his fellow high priests. Instead he focuses on running the temple. When he was a child, 35 full-time priests served the temple in Udvada. Now, there are seven.

Mr. Dastoor has two daughters and a son who, in 10th grade in Mumbai, is an ordained priest already. He wonders what tradition he can pass on.

“What is he going to come and do over here?” Mr. Dastoor says. “Because there’s going to be no one over here.”

Outside a Parsi temple in Mumbai. Some Parsis believe that the dwindling population will spur the appearance of a savior.
Sarosh Bana, a Parsi journalist. He said that many Parsis would rather raise one child with a high-quality education inside a city than have a larger family in the suburbs.
Parsi homes in Udvada.
Etiketler
Indi̇a One Sai̇d Tata Who

3,000 Yazidis Are Still Missing. Their Families Know Where Some of Them Are.

After Iraqi Election, a Shiite Leader Emerges as an Unlikely U.S. Ally

Minnesota’s governor calls up the National Guard to ease crowding in hospitals.