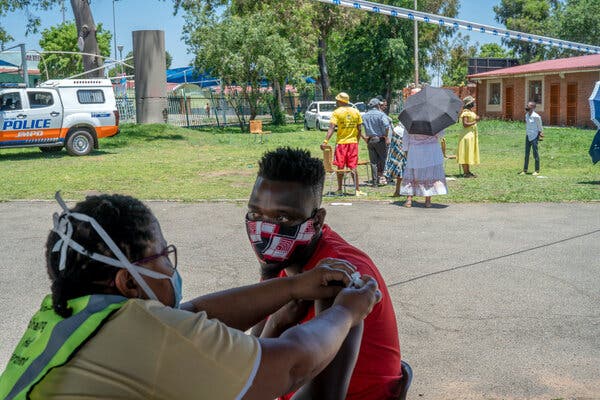 Vaccination rates in South Africa are falling far short of the nation’s goal, administering only 130,000 out of a daily goal of 300,000. Credit…Jerome Delay/Associated Press

A new variant of the coronavirus, whose mutations show evidence of a “big jump in evolution,” is driving an increase in new Covid-19 infections in South Africa, health officials said yesterday. Scientists have so far detected 22 cases of the B1.1.529 variant in Gauteng Province, the country’s economic hub.

Botswana’s health ministry confirmed that four cases of the variant had been detected in people who were all fully vaccinated. All four were tested before planned travel. One sample was also detected in Hong Kong, carried by a traveler from South Africa, South African scientists said.

The variant is alarming because of the density of its mutations, raising fears that it could be highly contagious. Scientist still do not know how effective existing vaccines will be against it, as it shares similarities with the Lambda and Beta variants, both of which are associated with an innate evasion of immunity.

Naming rites: South African scientists will meet with the W.H.O. technical team today and assign a letter of the Greek alphabet to the variant.

More than 40 migrants leaving the northern French coast to cross the English Channel on Wednesday.Credit…Gonzalo Fuentes/Reuters

The English Channel, where at least 27 people died this week while attempting to cross in a flimsy inflatable boat, is the final, treacherous leg of the journey for migrants hoping to reach Britain. Despite the extreme danger, migrants living in makeshift camps on France’s northern coastline dream of making the crossing.

In recent months, the number of people setting off into the Channel has soared because the authorities have cracked down on other routes to England, especially by truck through the tunnel under the Channel.

French and British leaders vowed this week to crack down on migrant crossings of the channel, blaming organized smuggling rings and each other. In the past five years, both countries have sought to discourage asylum seekers by making their situation as difficult as possible, a policy that experts say creates unnecessary danger.

Analysis: The National Assembly said last month that the French government’s migrant policy had been a failure and that it had led to violations of migrants’ rights, with the vast majority of public spending going to security measures rather than to health and other assistance.

First person: Sassd Amian, who fled war in South Sudan four years ago, said he was pinning his hopes on the trucks bound for the Channel Tunnel despite the dangers. “Death,” he said, “is nothing new in this life.”

Rescue workers arriving at the Listvyazhnaya coal mine Thursday. The photograph was provided by the regional government.Credit…Kemerovo Region Government Press, via Agence France-Presse— Getty Images

Dozens killed in Russian mine blast

A gas buildup and explosion in a Siberian coal mine about 2,200 miles east of Moscow killed at least 52 people, including six rescuers, early yesterday, the country’s worst mining disaster in over a decade, Russian officials said.

The accident at the Listvyazhnaya mine in Russia’s Kemerovo region occurred after a ventilation shaft began filling with gas, Russia’s Investigative Committee reported. Rescue efforts at the mine, which plunges 1,300 feet into the earth, continued throughout the day even as the death toll kept rising.

Miners initially considered missing were gradually shifted to the list of the dead until late yesterday, when the authorities said a methane explosion had most likely made it impossible for the miners to get out. Interfax, the Russian news agency, reported that there appeared to be no hope of finding anyone else alive.

Context: Coal mine accidents have long been common in Russia, with some attributed to the sporadic enforcement of regulations. Government agencies discovered hundreds of violations this year at the Listvyazhnaya mine. Though they imposed fines and ordered work suspended, the mine remained open for business.

Before he moved to Sydney in 2017, Damien Cave, our Australian bureau chief, was a dutiful landlubber, splashing around in the ocean a few times a year and then retiring to a beach chair.

“In Australia, something changed,” he writes. “I went from ignoring swimming to hating it to craving the sensation of being submerged, stretching my body and mind with the ocean’s creatures and currents.”

“Salmon: Traces of Escapees,” a work by one of the nominated groups, Cooking Sections, on display at the Herbert Art Gallery and Museum in Coventry, England.Credit…Doug Peters/Press Association

Fighting about the Turner Prize

Founded in 1984, the Turner Prize used to celebrate a buzzy individual artist. But for the past three years, there has been no single winner for the British visual arts award, Elizabeth Fullerton reports for The Times.

In 2019, artists surprised judges and shared the prize. During the coronavirus pandemic, prize organizers distributed funds. And this year, judges will draw a winner from a shortlist of five collectives, each of whose work has as much to do with social activism as it does art.

The nomination of these collectives underlines the quandary for the Turner Prize today: Is its role to capture the zeitgeist or to reward excellence?

Some celebrated the move as an anticapitalist decision. Others mocked it as a kowtow to performative social justice creators. “It’s all well and good having these views, which are probably genuine — but where is the bloody art?” a longtime critic of the prize said.

Hanukkah begins on Sunday night. Celebrate the Festival of Lights with our pure potato latkes.

What to Listen to

Revisit Margo Guryan’s 1968 album, “Take a Picture.” The singer-songwriter, who died this week at 84, found unexpected fame three decades after the album’s release.

Our critic calls “Drive My Car,” a Japanese film about grief, love and art based on a short story by Haruki Murakami, a “quiet masterpiece.”

Here’s today’s Mini Crossword, and a clue: Inspirations for the Taylor Swift songs “All Too Well” and “We Are Never Ever Getting Back Together” (four letters).

That’s it for today’s briefing. Have a wonderful weekend. — Natasha

There is no new episode of “The Daily.” Catch up on some recent episodes.