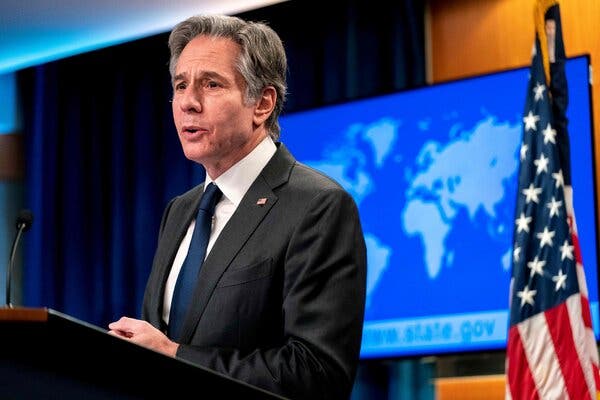 Russia and U.S. to meet in effort to break deadlock

Seeking to head off a potential assault on Ukraine, Antony Blinken, the U.S. secretary of state, will meet with Sergey Lavrov, Russia’s foreign minister, in Geneva on Friday as the two sides explore whether there is still a diplomatic path to avoiding a conflict in Eastern Europe.

Negotiating sessions last week ended in an impasse, with talks deadlocked over Russia’s demand that NATO pledge not to expand eastward. Russian officials said they expected a written “article-by-article” response from the U.S. to their proposals, which would effectively restore Russia’s sphere of influence to close to Soviet-era lines. It is unclear whether Blinken will provide such a response.

A State Department official warned that Russia — which has assembled as many as 100,000 troops along Ukraine’s border — could launch an attack at any time. But in a call with Blinken, Lavrov rejected the idea that Russia was planning to do so and insisted that it was up to Ukraine to calm tensions, according to Russian officials.

Deterrence: The U.S. and its allies have promised to impose punishing sanctions if Russia attacks Ukraine. Germany’s chancellor, Olaf Scholz, warned Russia of “high costs” in the event of military action, which some have speculated could involve the Nord Stream 2 gas pipeline.

Prime Minister Boris Johnson is facing challenges to his hold on office.Credit…Pool photo by Ian Vogler, via Associated Press

As pressure mounts, Johnson teases an end to some restrictions

Boris Johnson, Britain’s besieged prime minister, indicated yesterday that a plan to ease coronavirus restrictions in England might be in the works, a move that could mollify critics in his restive Conservative Party at a time when political scandals threaten his future in Parliament. His Cabinet will meet today to review the current curbs and to discuss the latest health data.

Under the current rules, introduced in December, people have been urged to work from home if possible and instructed to wear masks in public transportation. “Decisions on the next steps remain finely balanced,” Downing Street said in a statement that urged the public to get booster shots.

Whether Johnson can remain in power may depend on whether a fellow Conservative is willing to start a plot against him. There are many candidates, but the tactics and timing of a leadership challenge are fiendishly tricky. An uneasy lull has settled over Westminster as Johnson’s allies and rivals wait for the results of an internal investigation of the parties held at Downing Street during lockdown that prompted the recriminations.

Analysis: “Boris Johnson is not going to resign voluntarily,” said Jonathan Powell, who served as chief of staff to Prime Minister Tony Blair. “He’s only going to go if he is shown the door by his own party.”

In its biggest deal ever, Microsoft plans to buy the video game company Activision Blizzard.Credit…Benoit Tessier/Reuters

A $69 billion bet on the metaverse

In its largest ever acquisition, Microsoft agreed to buy the video game maker Activision Blizzard, creator of such games as Call of Duty and Candy Crush, for $68.7 billion in cash. (It also inherits Activision’s troubled workplace.) The deal will position Microsoft for the next generation of the internet, and it is not expected to close until the next fiscal year, which ends in June 2023.

Regulators in the U.S. face a challenge in deciding how to approach the huge deal. Democrats and Republicans alike have pushed to limit the power of technology giants. The takeover would make Microsoft the world’s third-largest gaming company by revenue, behind Tencent and Sony, the company said.

Context: One main driver of video game deals is the race for exclusive content: Locking up a major franchise like Call of Duty or Skyrim, for instance, could force fans to switch from Sony’s PlayStation to Microsoft’s Xbox to retain access.

Is Pluto a planet? The debate about the icy world that used to be the ninth planet of the solar system is as much linguistics as science, and it is not a question with simple answers.

Instead, it is a fascinating story about an ancient word with shifting meanings, humanity’s evolving views of its place in the cosmos and the sometimes messy process of scientific discovery. Open to changing your mind? This quiz is for you.

A new book, “The Betrayal of Anne Frank,” made headlines this week after naming a Jewish notary, Arnold van den Bergh, as a suspect in the unsolved mystery of who alerted the authorities to the hiding place of the teenage diarist Frank, her family and four other Jewish people, resulting in their deportation to concentration camps.

But many experts said they doubted the theory expounded in the book. “They came up with new information that needs to be investigated further, but there’s absolutely no basis for a conclusion,” said Ronald Leopold, the Anne Frank House’s executive director.

The suspect wasn’t new to historians. Anne’s father, Otto, received an anonymous note that identified van den Bergh as the perpetrator. The book, based on a six-year investigation, claims that van den Bergh had a list of Jews in hiding that he had gotten from the Amsterdam Jewish Council — but researchers say there is no evidence that the council had any such list.

Dara Horn, the author of “People Love Dead Jews,” an exploration of antisemitic attitudes, said the story fit into a trope of Jews turning against Jews. “There’s even a name for this in Jewish studies, called ‘Holocaust inversion,’” she said. “There’s a reason why that’s appealing to a non-Jewish audience. It makes it so you don’t have to think about your own responsibility.”

Related: The Nazi role in looting of antiquities is drawing attention as scholars peel back the mysteries of what happened to objects that were excavated or seized eight decades ago.

This recipe for pierogi ruskie, stuffed with potatoes and cheese, comes from one of the most famous milk bars in Warsaw.

In “You Don’t Know Us Negroes,” a reissued collection of Zora Neale Hurston’s essays, the Harlem Renaissance author touches on “just about everything imaginable,” our reviewer writes.

What to Listen To

Here’s today’s Mini Crossword, and a clue: Strip of sails and rope, as a ship (five letters).

P.S. In the first episode of “On the Job With Priya Krishna,” a new series from NYT Cooking on YouTube, a bodega manager in Brooklyn makes sandwiches for hungry customers — and millions of viewers on TikTok.

The latest episode of “The Daily” is about the toll of America’s air wars.

Why Trump and DeSantis Are Talking About Australia